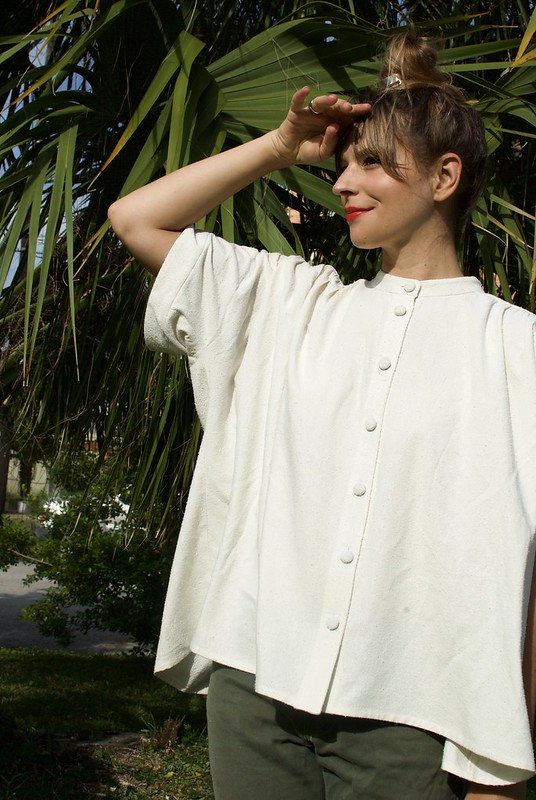 Hello there! I seem to be on a bit of a kick making unusual white blouses! After my Edwardian blouse entered into my regular, weekly wardrobe rotation  this past spring I realized that I have a hole in my closet for nice, yet neutral, tops! And it turns out that a nice neutral top is something I reach for a lot throughout the average workweek. So I have an unofficial goal this year to bulk up my work-wear seperates game, and hot off the presses is this breezy, smock-like blouse! 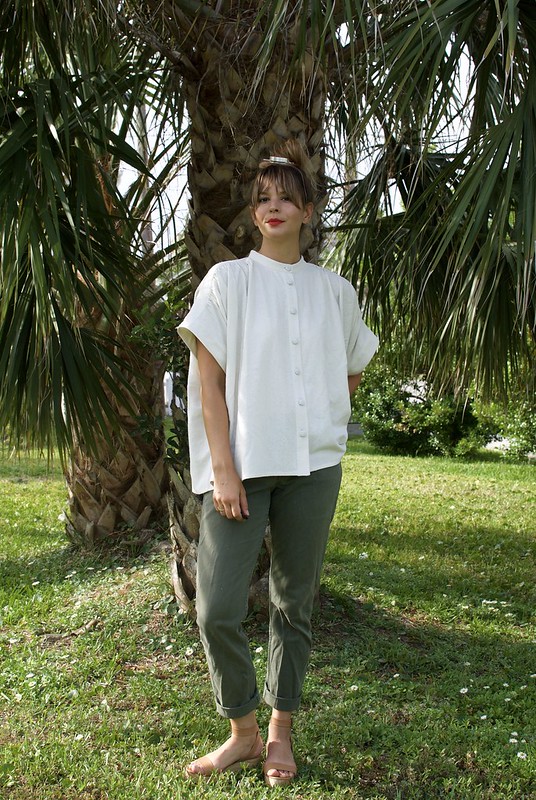 This is the Republique du Chiffon patterns Petula Shirt. This was my first time making a pattern from this company, and, without a doubt, my first time making a pattern from entirely French instructions! However when I saw this pattern was released I simply fell in love with it. Someone recently commented on my Instagram account that my style has changed quite a bit since my early blogging days, and while I definitely agree, one thing I feel has remained consistent is my love for a good voluminous design! 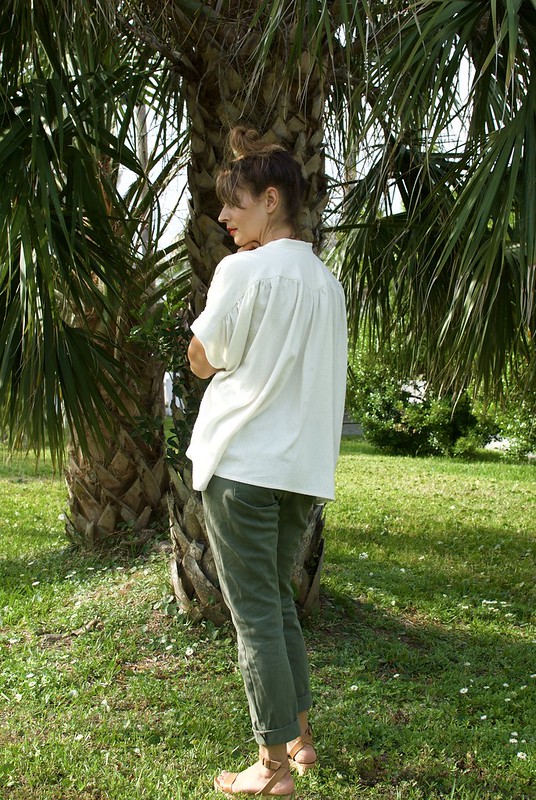 All the gathering along the shoulder yoke creates such a wonderfully full shape. I also love the play of masculine and feminine in this design with the gathers, pointed yoke, sleeve bands, and collarless stand.  While normally I tend to stray towards overly feminine looks, this one feels pleasingly androgynous, and I’m into it! 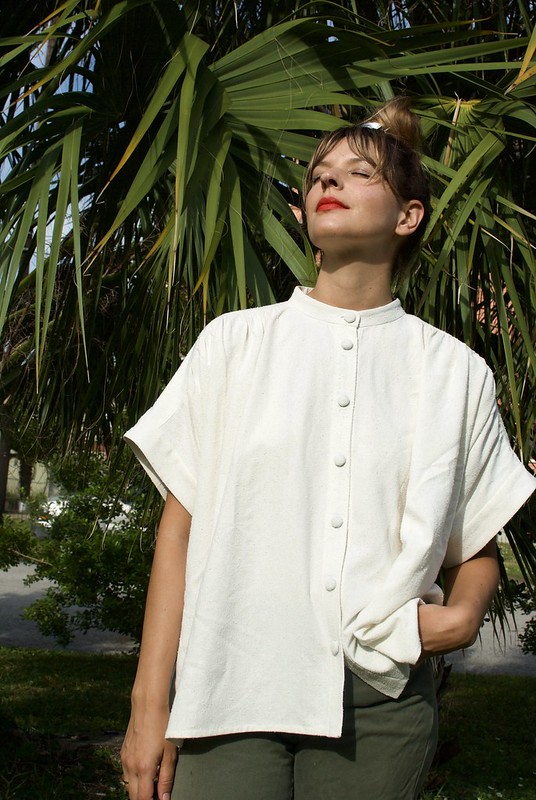 I didn’t really have a fabric in mind when I bought this pattern, but once it arrived I decided I wanted to find something from my stash to make it out of, so I went digging and decided on this Antique White Pilled Cotton Twill (no longer available – however I also think this would be beautiful in a lightweight linen) that I got from Mood almost a year ago. I really liked how natural and homespun this fabric felt, and I thought that when combined with this pattern it might feel like an artists smock, which is a look I really like at the moment. I’m not sure if you can tell, but this fabric has kind of a rough, pill-y surface, yet it’s still very lightweight and breathable and has a nice drape to keep those gathers looking fluid instead of puffy. It actually reminds me a lot of silk noil.

I went with covered buttons, to keep it classy! I’m always a bit suspicious of those Dritz covered button kits, and these are no exception. I’m half expecting these to fall apart after one washing! However, over the years I’ve taken to adding a bit of glue to the button backs when I make covered buttons to keep everything held in place, and have definitely noticed that it helps with longevity. 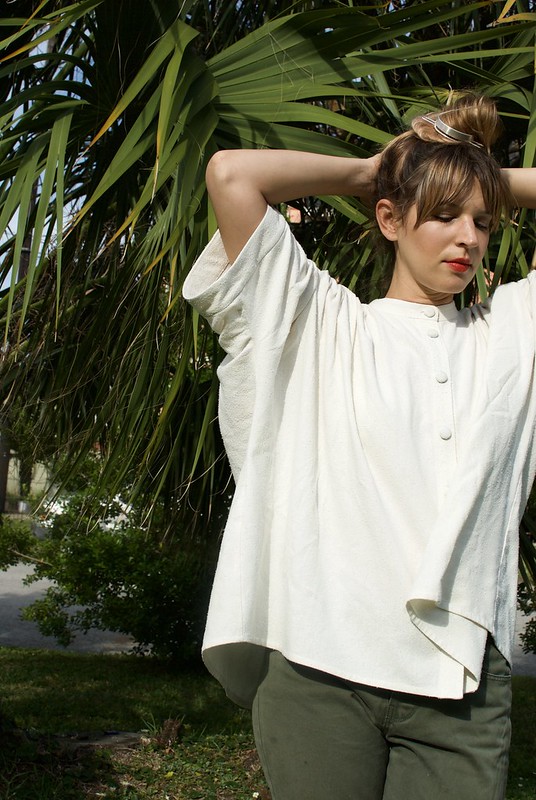 The pattern itself was easy enough to make, even without being able to read a word of French! If you’ve ever made a collared shirt before you’ll have no problem. In fact, I didn’t even look at the instructions. This fabric was super easy to work with – it pressed nice, gathered nice, and cut nice. No complaints!

I do have a couple of things I’d like to note about the pattern, however! The big one being: THIS PATTERN DOES NOT CONTAIN SEAM ALLOWANCES! If a friendly fellow sewist hadn’t tipped me off on Instagram I would have been completely in the woods on this, not being able to read French, and all! But thankfully I got the memo before I cut the paper pattern out (as is my usual habit) and instead I traced it and added 1/2 inch seam allowances. This made me so ornery I put the whole thing aside for a week! 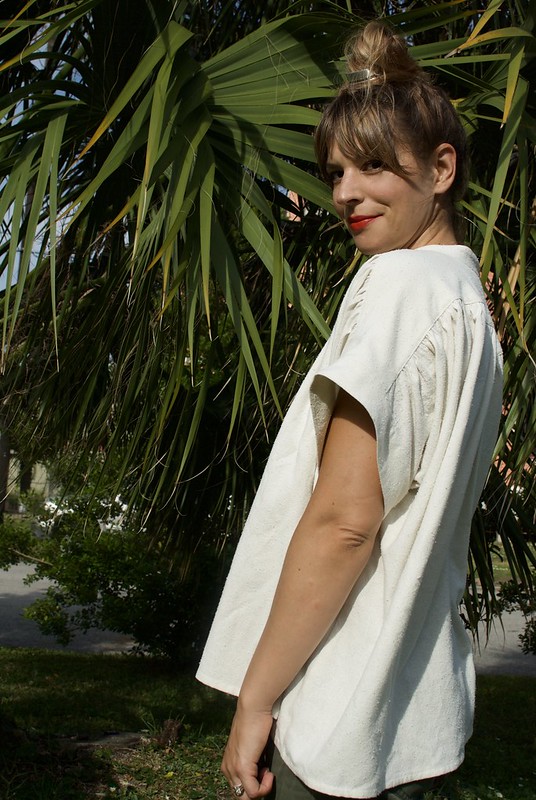 The other thing that kind of got my goat is that you’re instructed to cut both the button placket and the sleeve bands 4 times (this was written on the pattern pieces, and even with my lack of language skills, I could figure it out). This meant that you had to sew, for example, a button placket front and back, understitch it, then sew it to the shirt front, then topstitch, or stitch-in-the-ditch. And I just really don’t understand why these pieces weren’t drafted to simply fold in half. It would mean that instead of stitching the same seam 4 times, you’d only do it twice, which is a real time saver when you also consider grading seams, and pressing! Anyway, it just seemed extremely inefficient. In fact, since you have to trace the pattern and add seam allowances anyway, I’d suggest anyone who wants to make this blouse just mirror the button placket and sleeve band pieces so they can be folded in half. 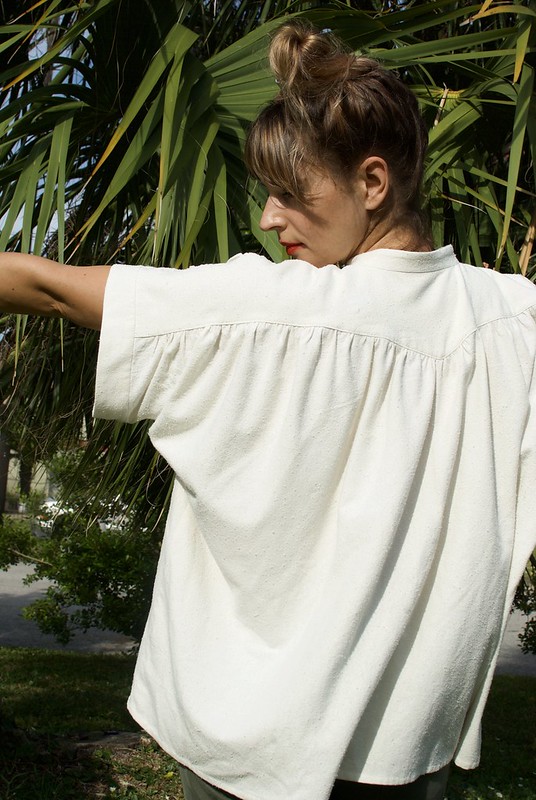 Other than that, it’s a great pattern! I love the finished blouse, and I’m sure I’ll wear it a lot! I think it feels both modern, and historic at the same time — I’m getting some 17th century peasant vibes from it. Artist smock, peasants smock… whatever it is, I’m into it!

A Neoprene Dress Inspired by Gucci!