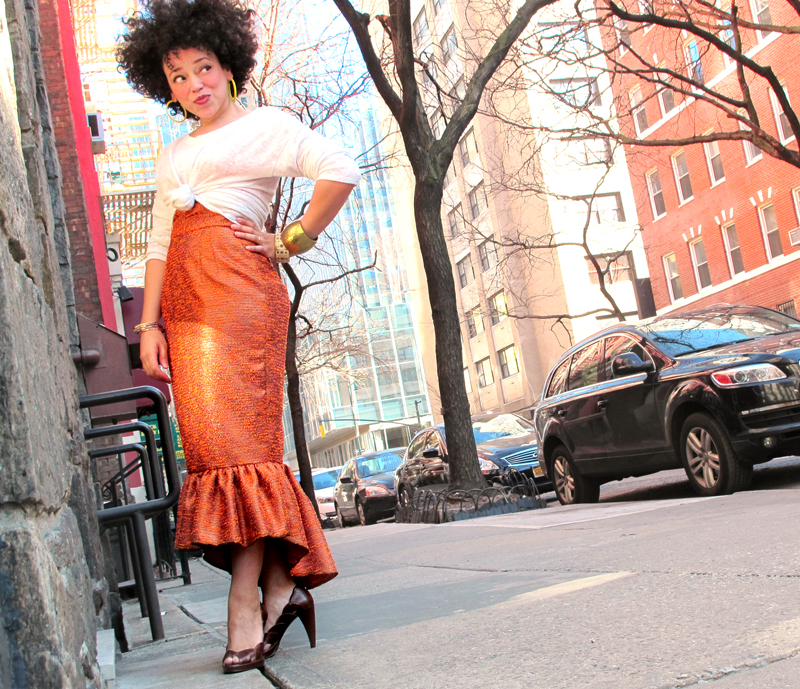 It’s weird, but there’s a specific time of day, in each specific season, when I can’t get enough of the skewed view from our apartment.  It’s well into cocktail hour as I type this, and the light hitting the buildings that fill our windows can’t be described as sun, more as afterglow.  indeed, even the use of “building” as plural is going a bit far.  There are two beasts that eat our glass rectangles onto the world, both of different brick, different perspective even, blonde diagonal on left and straight ahead redhead on right, and when you stare at the view for too long you believe you’re looking at some strange faux hollywood backdrop.  This view lasts for about three minutes before it disappears.  Golden hour in one hundred and eighty seconds.
Apparently the close beverage and the distant view make me wax poetic, but one must always focus on a bit of breadth when toiling at the computer, to save one’s peepers.  And thus endeth your PSA for the day.  Lest I fall back into old habits and talk about everything but the sewing (and o believe me, I WILL) let’s get down to the garment. 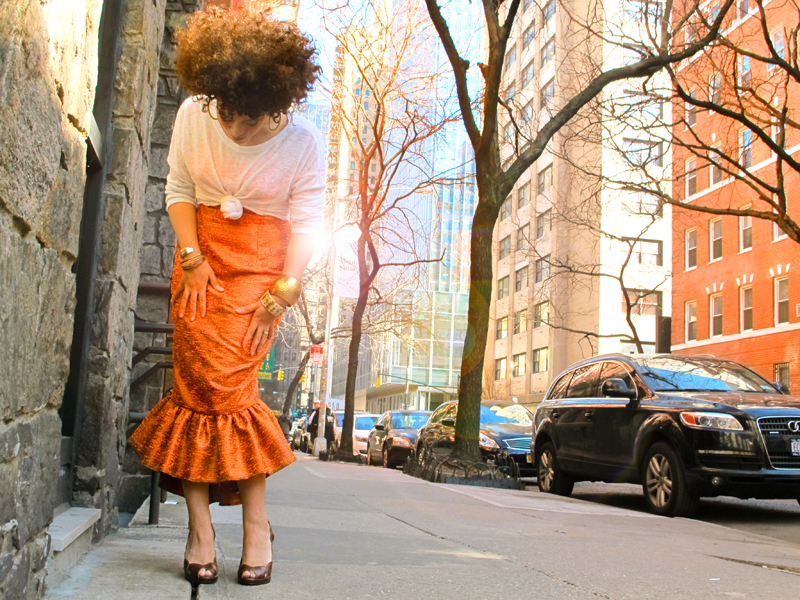 This skirt, my designer inspiration garment, was supposed to have a mate, but in the end, I decided it was better to just make her as well as I could, rather than hammer through two singles as fast as I could.  Why hastily introduce separates before they’re mature enough to handle a relationship??  I don’t want one night stands in my closet anymore.
Really though, I shot myself in the pied (my high school french comes back to me the more I imbibe, thank you Mme Minor for passing me with a C grade)… I could have made a match, had I been able to concentrate on the lovers at hand.  But, like a speed dater, I flitted happily between so many runways, I can’t even remember half of them anymore. I got all the way through minute 8 with an Anna Sui dress, but then Altazurra whispered sweetly to my right, and I was off to the next table. 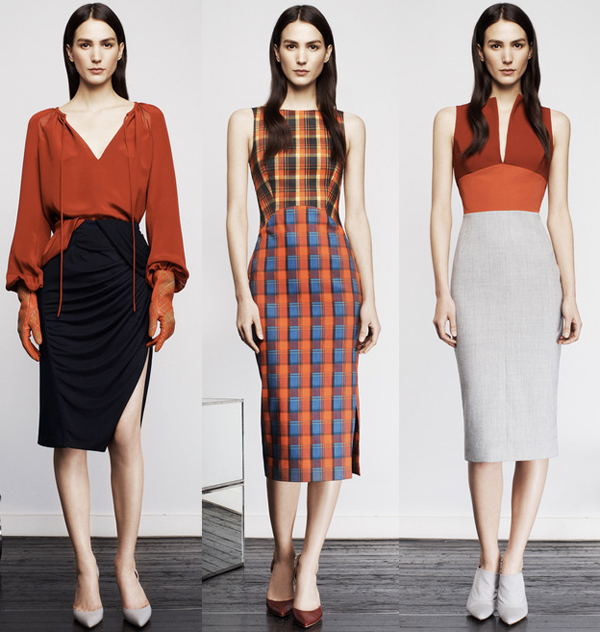 YUMMMM.  Come sit at my table, if indeed you can sit in your skirt, m’ladies.  I hope you can, cause I can full on lounge in mine!  Oh, excuse me, I haven’t even mentioned the third player in this love triangle– or is it a foursome now?  EGADS.  The charlotte skirt, from…you know them, I do so hope you love them….my favorite indie gals…the ladies at By Hand London!  how I’ve not made this pattern yet is beyond me.
It has been said that I’m not the brightest bulb in the box. 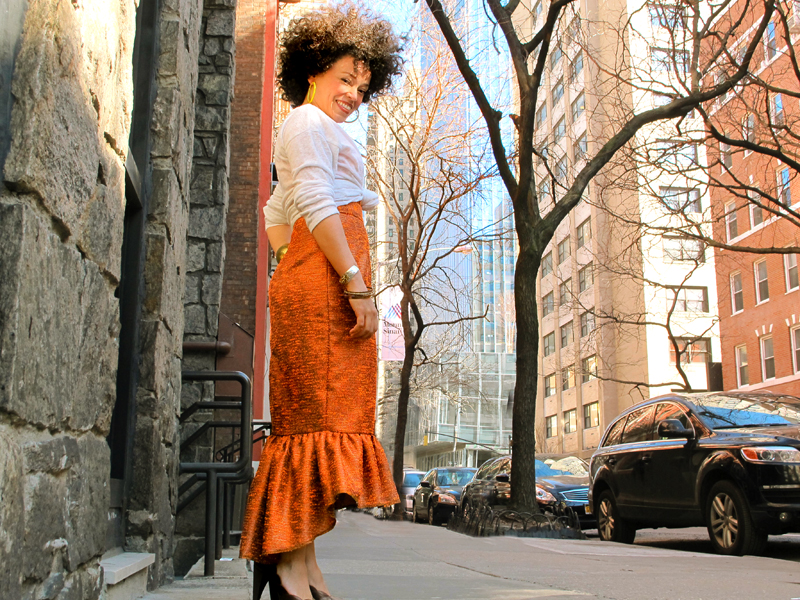 BUT I’LL SHINE IN ORANGE N GOLD BOUCLE LIKE A HUNDRED WATT FABRIC BULB
I took 4 inches off the length, from above the hemline, and that’s the one adjustment I made.  Uno.  Un. C’est tout.  And I went ruffle.  Because given the choice WHY WOULD YOU EVER NOT HAVE THE RUFFLE. 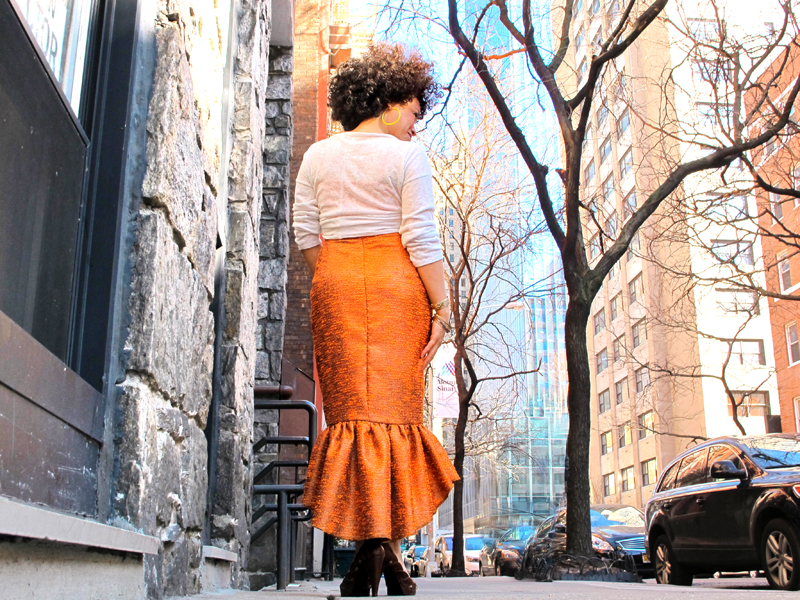 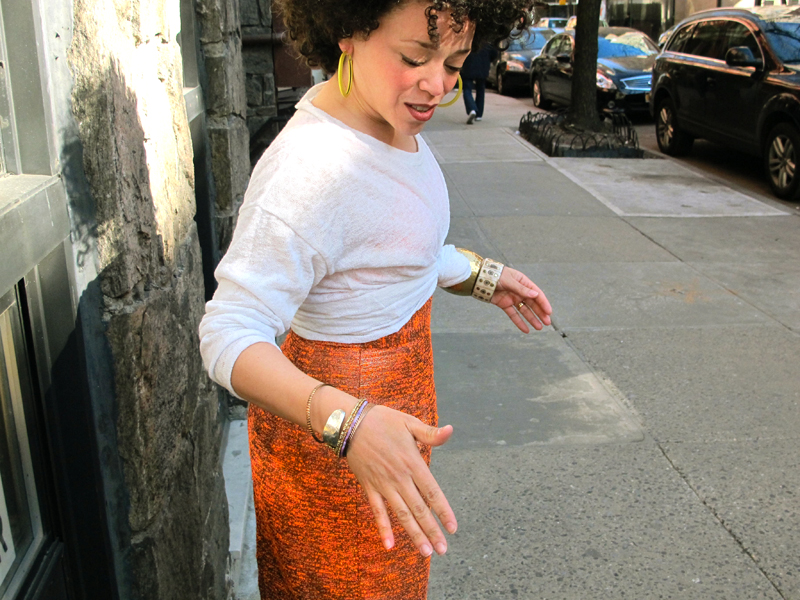 Here’s a shot of me passive aggressively “advising” Ruggy to get the shot right.  Bonus side effect, LOOKIT THAT SIDE SEAM!  Straight as an arrow!!  On a hiphugging skirt for godsakes!   BHL FOREVER. 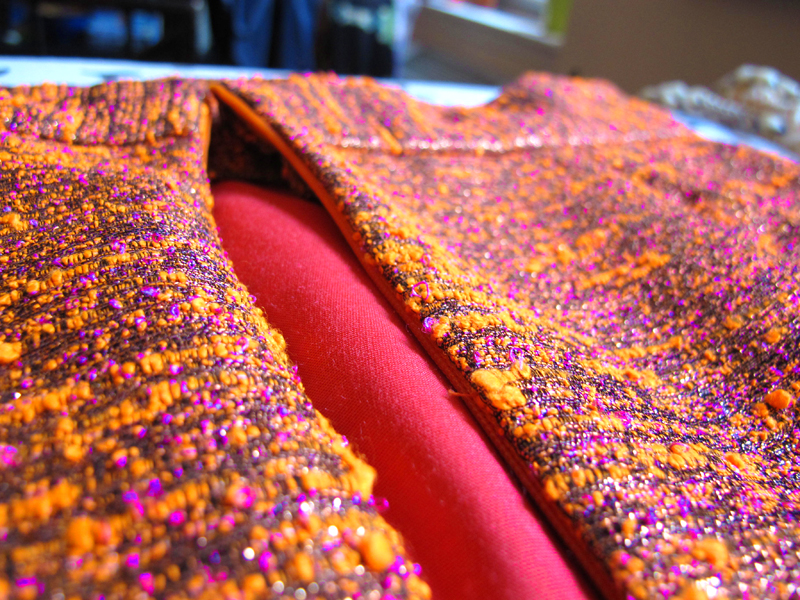 It’s hard to photograph just how gorgeous this fabric is in real life.  Yes, that’s radiant orchid in there, and the gold is almost watery in its iridescence.  Her intended mate is a plaid chartreuse shot through with silver.  I like mixed marriages. 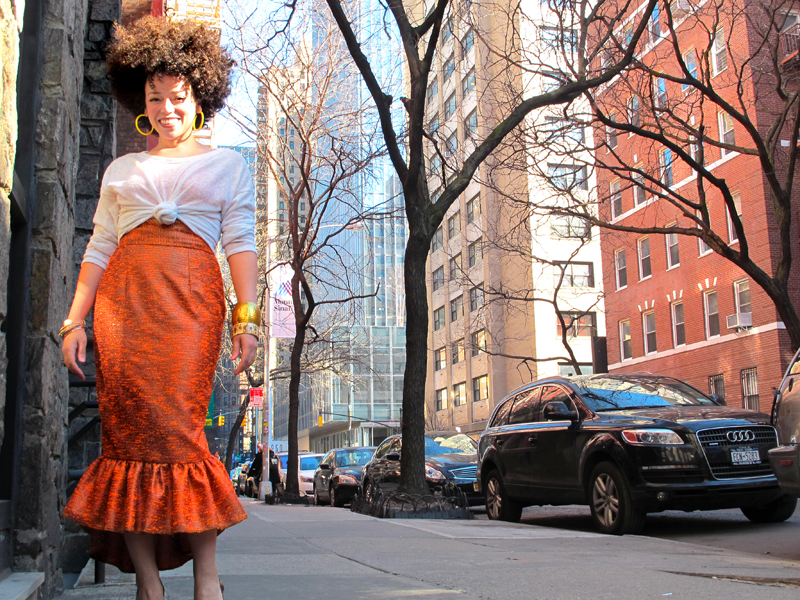 Did you find inspiration on the runways this season? For me, it was overload!

A Geometric Skirt & Faux-Wrap Top for...

Brocade for the Holidays!