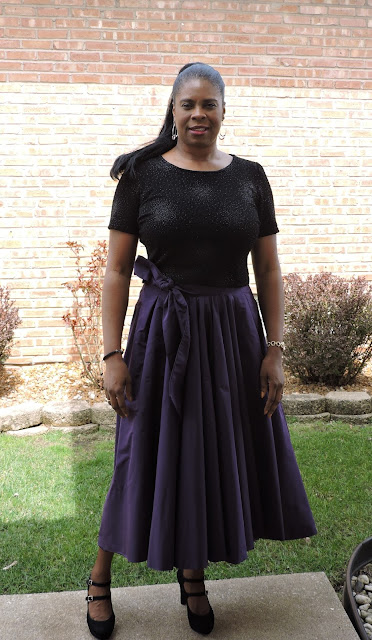 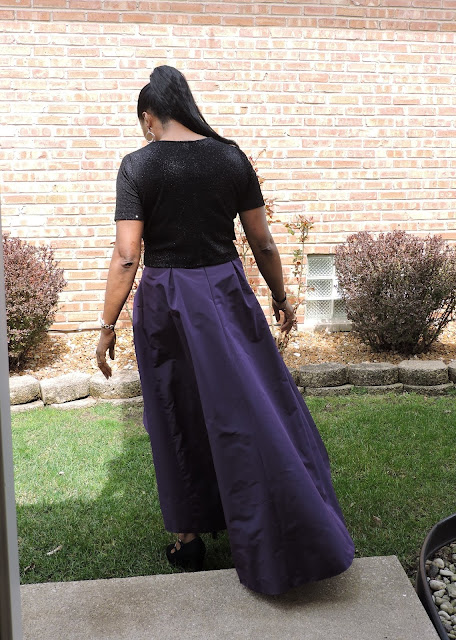 There is something magical about the color purple.  Yes, it’s noticeable, vibrant, and regal.  It’s a royal color worn by noble throughout the ages. The color purple is also associated
with power, ambition, luxury, wealth, dignity, grandeur, peace, independence, and wisdom.
So, you can understand why I am drawn to the color. It symbolizing many qualities that I am or hope to be.  Simply, it is beautiful and I love the many shades of it.  I paired this mysterioso purple silk faille with an audience high-low full skirt, Vogue 8980. 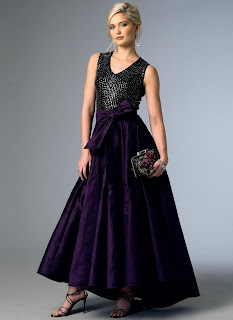 It’s not your typical box pleat skirt.  It is made of circles: full and half circles.  I like how to circles come together to create beautiful drape and shape.  There are a few small pleats about the waist, but the majority of the fullness is formed by the cut of the circle.  To sum it up, this skirt is huge.  It took about 5 yards to make it.

I only added a few inches to the length. Additionally, I used tulle to underline it and completely lined the skirt attaching it at the hem.
I could have used a stiffer interfacing in the waistband though.  There was some creases across the small of my back.  Not too, too bad as the cropped top covers it. 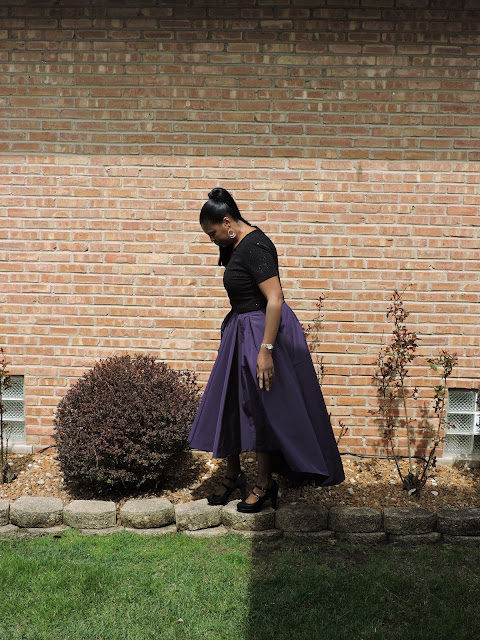 For my sparkling top I used  glamourous poly-lycra jersey with star burst all over it.  Very pretty, but the glitter was a little messy.  So I shake, shake, shook it until most of the glitter fell off leaving me with enough sparkle to make the top unique compared to the typical t-shirt cropped tops.  Underneath all the glitz is a lovely texture knit that has a fair amount of stretch. 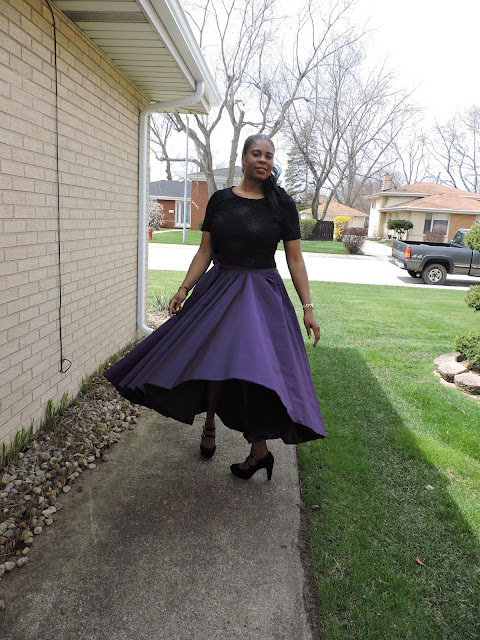 Initially, I thought I would complete the look with Butterick 6285, but after making it I didn’t like the outcome of it.  I ended up using Vogue1314 to create a little cropped t-shirt styled top.  It’s not what I originally envisioned for the fabric, but it was doable.  I did notice, though, some winkles in the bust area.  This knit does have more stretch than the previously used knit for this pattern.  I will see if I can tweak it a bit to remove the winkles.
Overall, the outfit is very good.  It was my last garment modeled for the Haute Couture Club of Chicago fashion show 2016.  Although it’s not what I originally envisioned; it works and I will wear it.
Parting Shot:  One of my favorite music artists, Prince Roger Nelson, made his transition yesterday (April 21, 2016).  He was only 57 years old.  The world has lost a great musical genius. 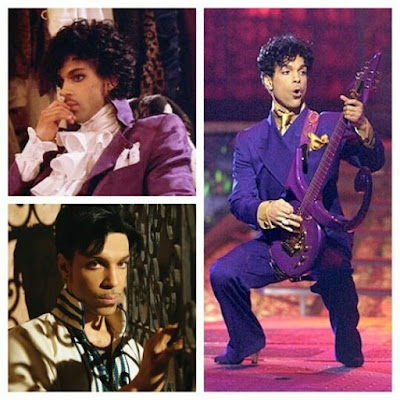 Happy Sewing!
C
“I think it pisses God off if you walk by the color purple in a field somewhere and don’t notice it.  People think pleasing God is all God cares about. But any fool living in the world can see He’s always trying to please us back.”
Alice Walker, “The Color Purple”
Princely purple silk Faille with sparkling black jersey knit – Vogue 8980 and Vogue 1314 was last modified: April 7th, 2017 by The Mahogany Stylist
knitMood Sewing Networkpurplesilkvogue
12 comments
0
Facebook Twitter Google + Pinterest

Of Feathers, Frocks And Fabulousness