written by Diary of a Chainstitcher August 4, 2014 20 comments

For this month’s Mood Sewing Network project I worked with two very different fabrics to make separates. First up is the blouse, for which I used this Marc Jacobs Silk with Embroidered Dots which I’ve had my eye on for months! It’s a beautiful silk crepe and when you get close up you realise the polka dots are actually formed of dense embroidery making it wonderfully unique. I was a little apprehensive about working with a fabric which sounded like it could be quite tricky, especially for a project with some fiddly aspects, but I took my time and had very few problems. 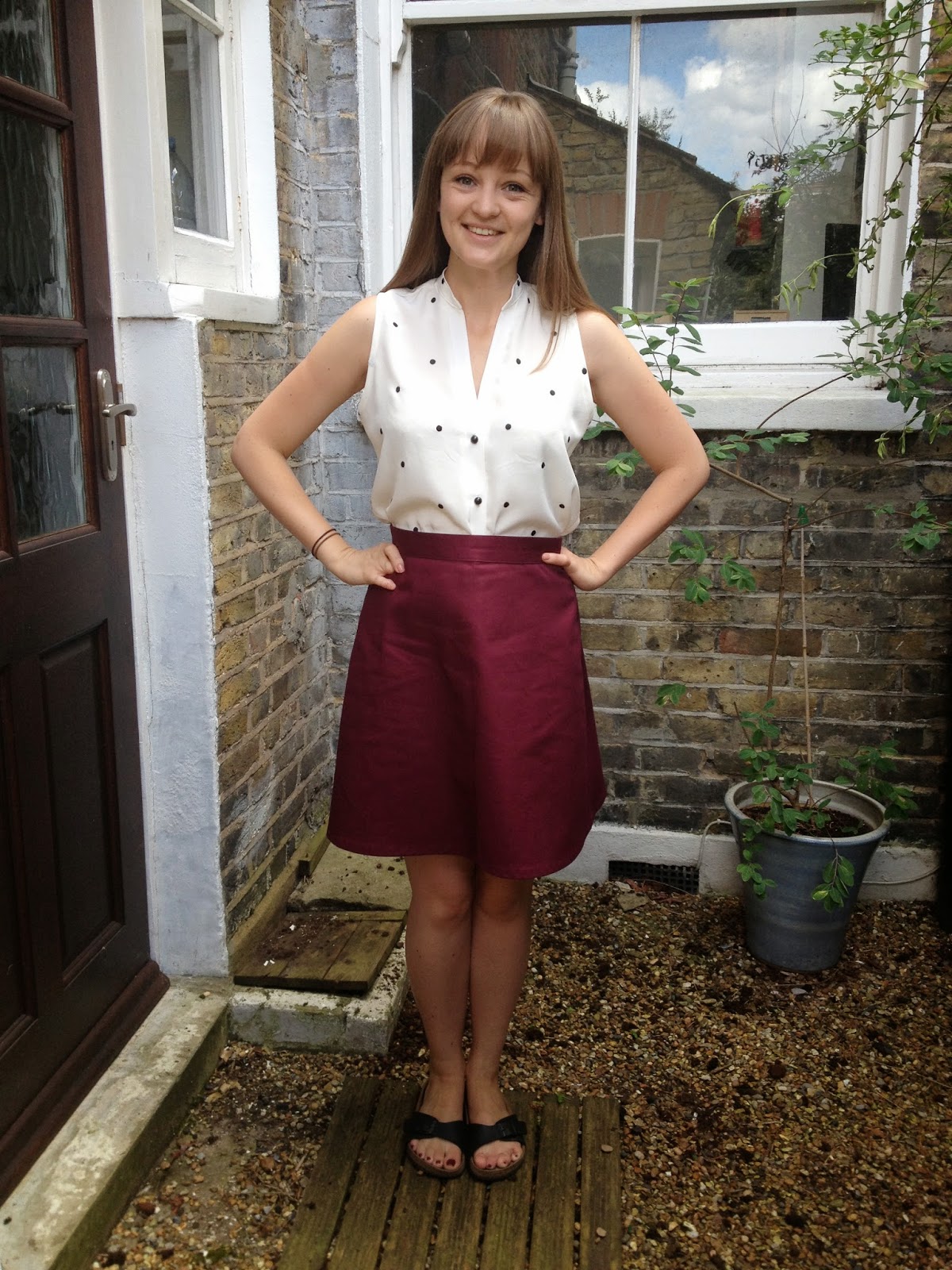 I washed the silk on a gentle 30 degree cycle as I wanted this to be a garment which I could wear often and not need to get dry cleaned. I like to think about how I want to be able to wash the completed garment when deciding how to pretreat and if I am particularly worried about shrinkage I give it a good couple of washes. It held up beautifully and took a medium heat from the iron too. Clean hands and concentration are a must when working with this silk as any mistakes will leave their mark, including any stray pins. I used a size 70 microtex/sharps needle in my machine and silk pins which I endeavoured to keep within the seam allowances as much as possible. I eliminated most of the topstitching as I wanted to keep the overall look clean but for the mandarin collar it was essential and the front placket needed some to help it lay flat. 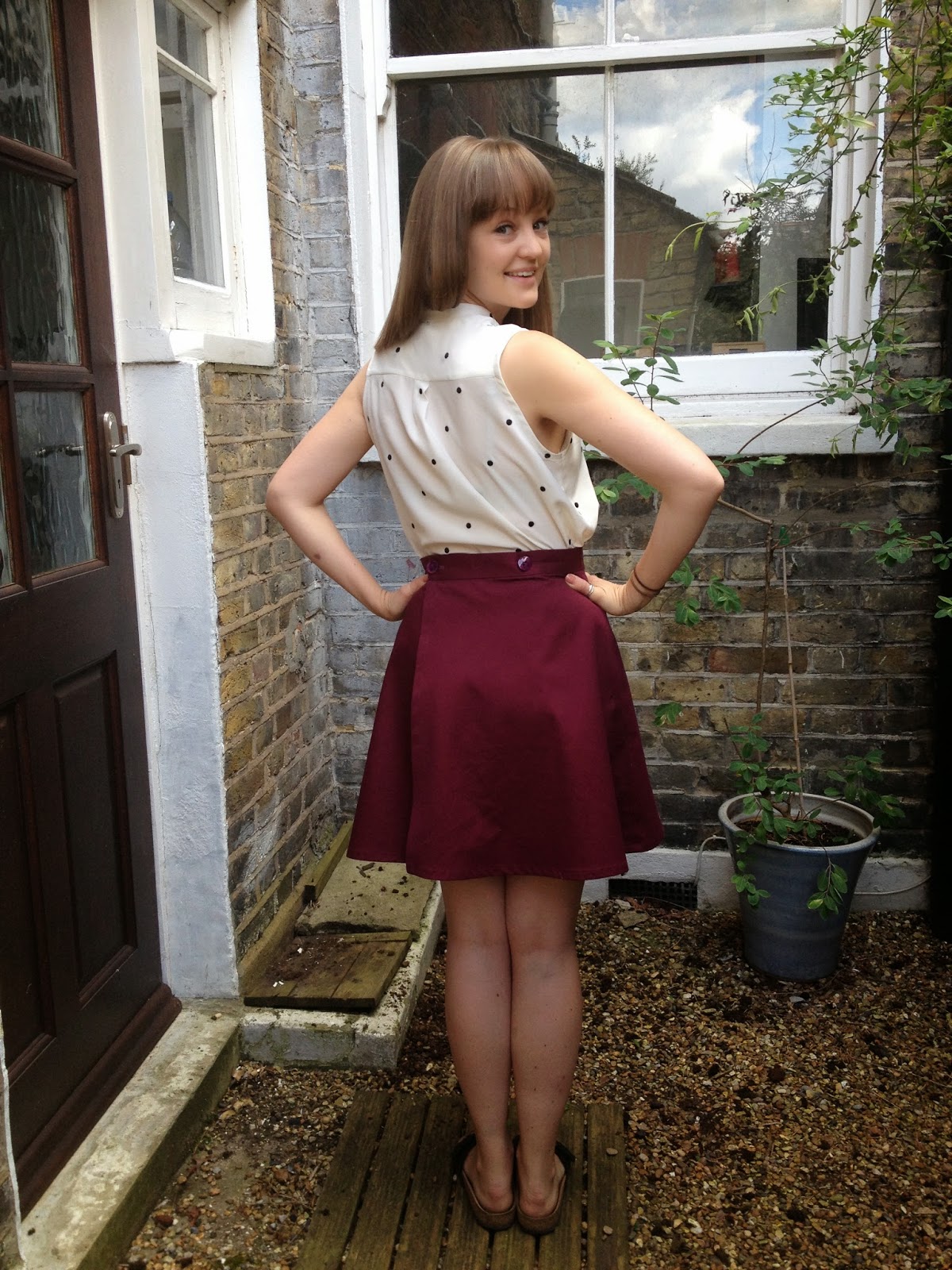 I finished any raw seams on my overlocker and both this and my regular machine handled the silk well. The only real issue I had was when sewing though the embroidered dots as my machine wasn’t all too sure about the change in thickness from delicate silk to thick embroidery thread. I had a feeling this might be tricky so when cutting I tried to lay out pattern pieces to ensure this happened as little as possible, especially around the collar! On the roll there is quite a wide area with no dots next to the selvedge so I was able to keep the plackets plain at least. It worked out ok with some gentle encouragement but if working with a similar fabric in future I would be tempted to unpick the dots in any areas where crossing them was unavoidable. 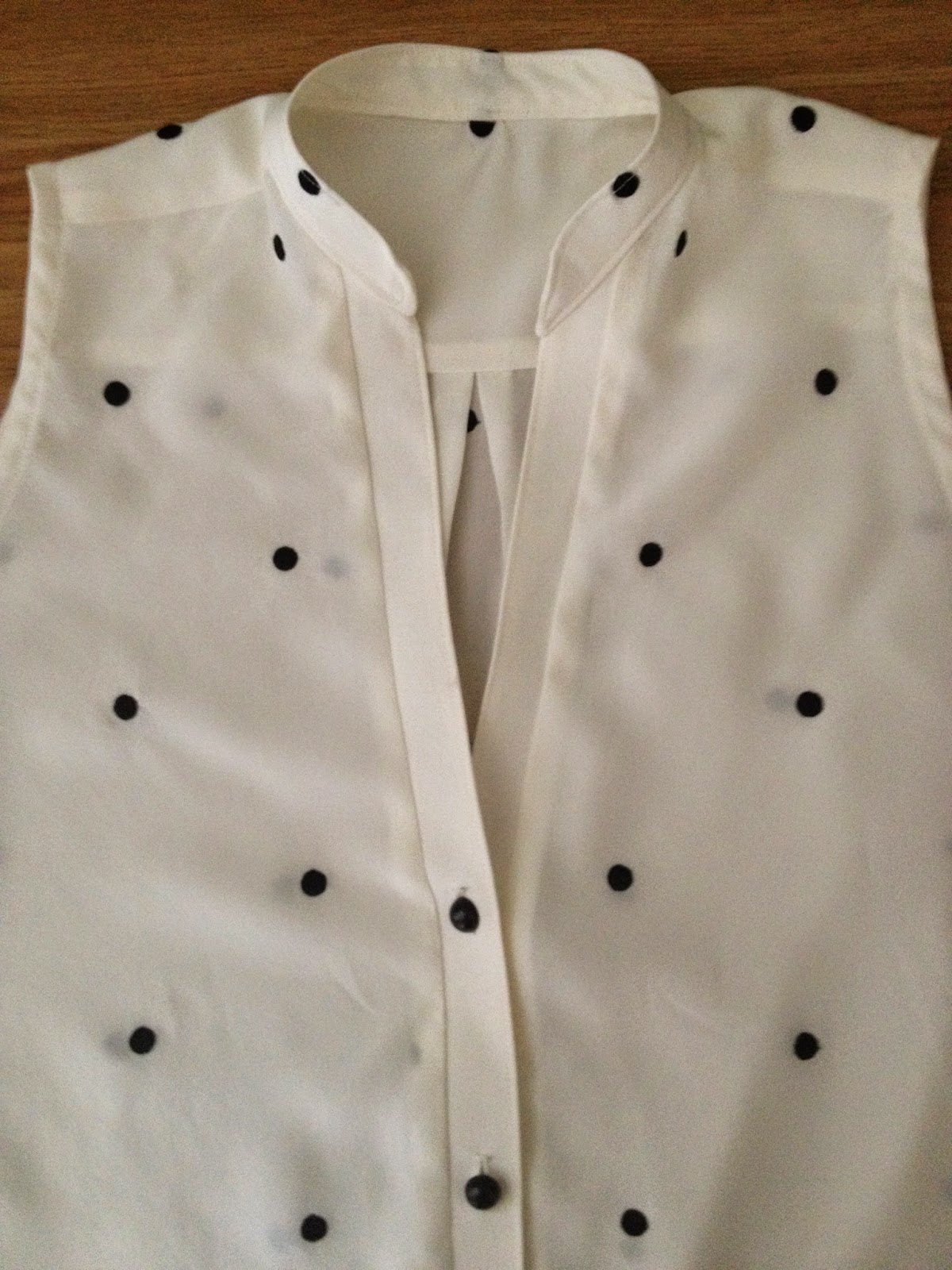 The pattern is a v-neck adaption of the Grainline Studio Archer Shirt which Andrea has posted an excellent tutorial for. This make turned into the blouse of many tutorials as I used Andrea’s collar tutorial and then Jen’s own tutorial to adapt the shape of the armholes for a sleeveless version. I also used Jo Sews’ tutorial to do a small no dart FBA which I think has dramatically effected the drape of this version compared to my first and I’m really pleased. I did wonder if the alteration was necessary in a sleeveless version but in this soft silk I think any pulling would have been very obvious and it needed to drape correctly. For reference I cut a size 4 and my FBA spread the pattern pieces just 1cm across and 2.5cm down. 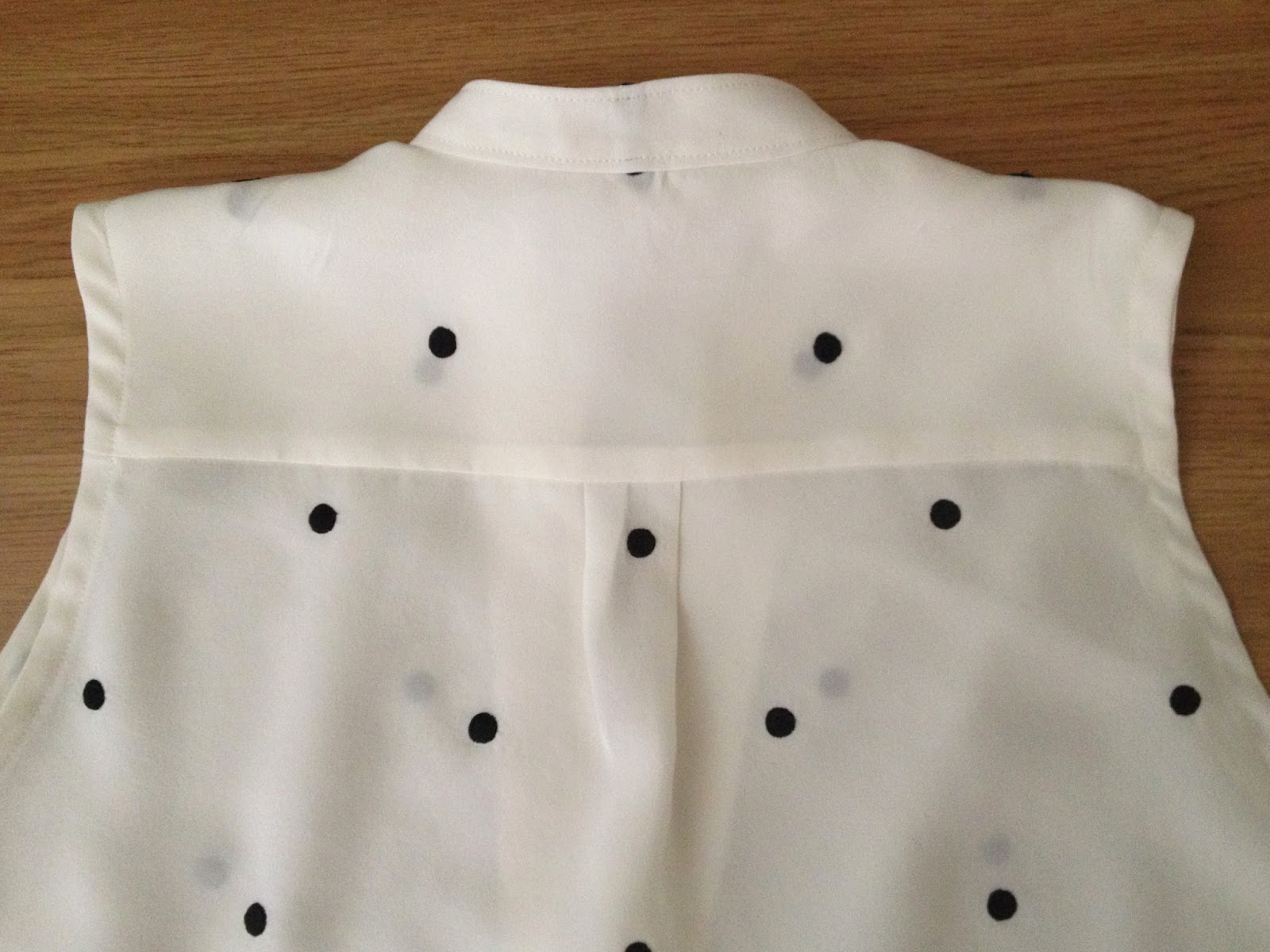 With no sleeves, pockets or turn down collar I only needed one solitary yard for this variation and it felt like a much quicker process than my first Archer shirt. I used binding to finish the armholes but used some scraps of plain cream crepe I had in my stash for this as dealing with silk binding is tricky enough without trying to work around those embroidered dots! I made some effort to line up the rows of the polka dots evenly across the front, back and yoke pieces and I think the dots ended up pretty well spaced. The buttons were left over from a project some time ago and I’m so pleased I still had them as I’m really enjoying how they imitate the dots! 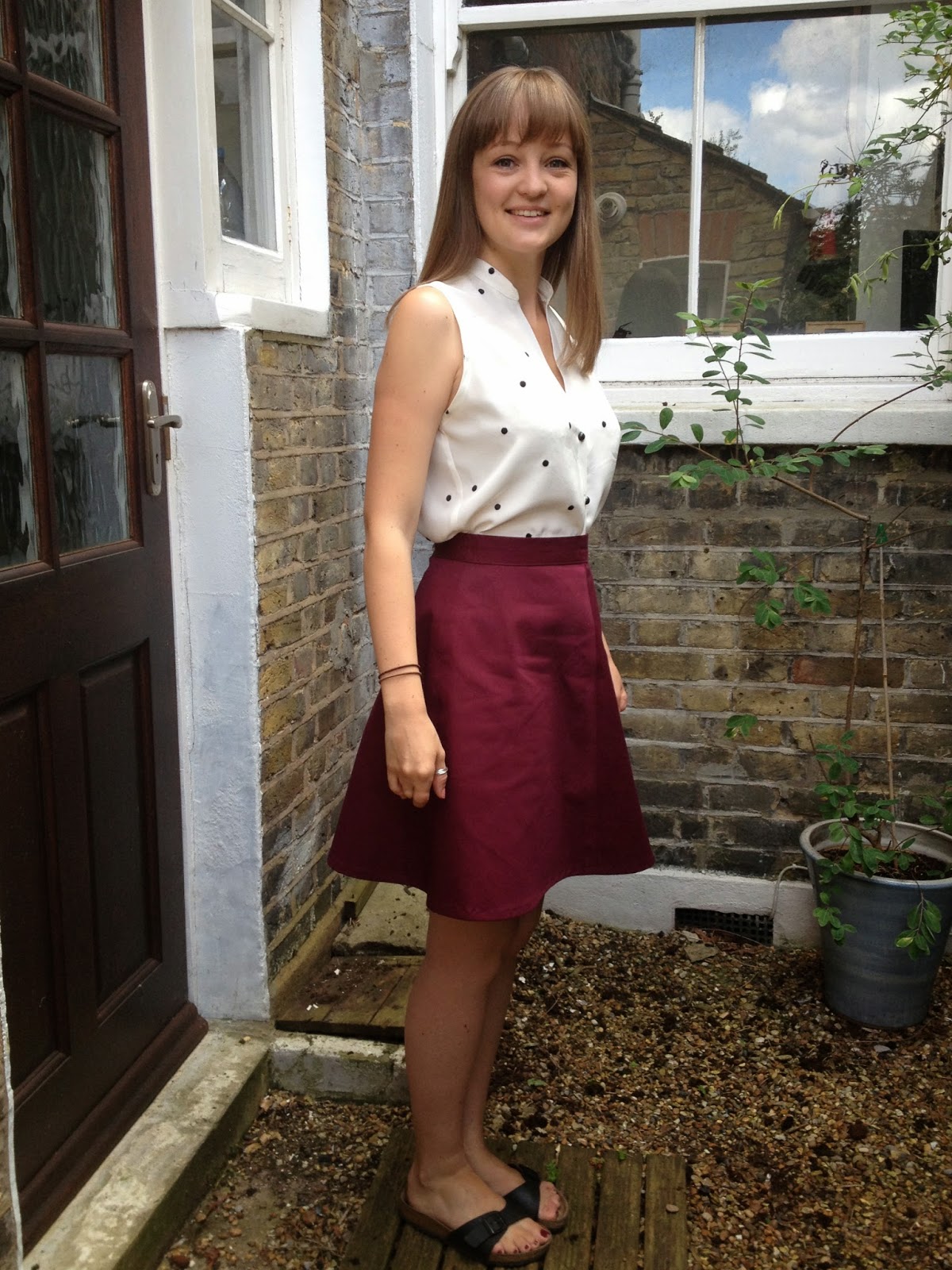 I had originally intended to make jeans to pair with this blouse and tie in with Sew Busy Lizzy’s Jeans in June & July challenge. However, a severe lack of time to get stuck into such a major project (especially for someone who has never made a single pair of trousers before!) turned into quite the happy accident as I could not be more pleased with the resulting skirt and how it works with the blouse. My rather lovely stretch denim will have to wait to be turned into jeans while I make do with RTW for the time being, as the Archer looks great untucked with skinnies too!

I’d ordered myself some of Mood’s Organic Cotton Twill in Plum to try out after reading fellow MSN blogger Lauren rave about it on a couple of occasions. That girl has some seriously good taste in fabric and was not wrong when she said that this stuff is great. It’s so enjoyable to sew with; it just does what it’s told and presses beautifully. The colour is wonderfully deep and vivid and the good news is there are a huge range of hues available. It does attract fluff like nobodies business though, my photographer (read boyfriend!) was constantly picking stuff off me during these photos and I have no idea where it was coming from! 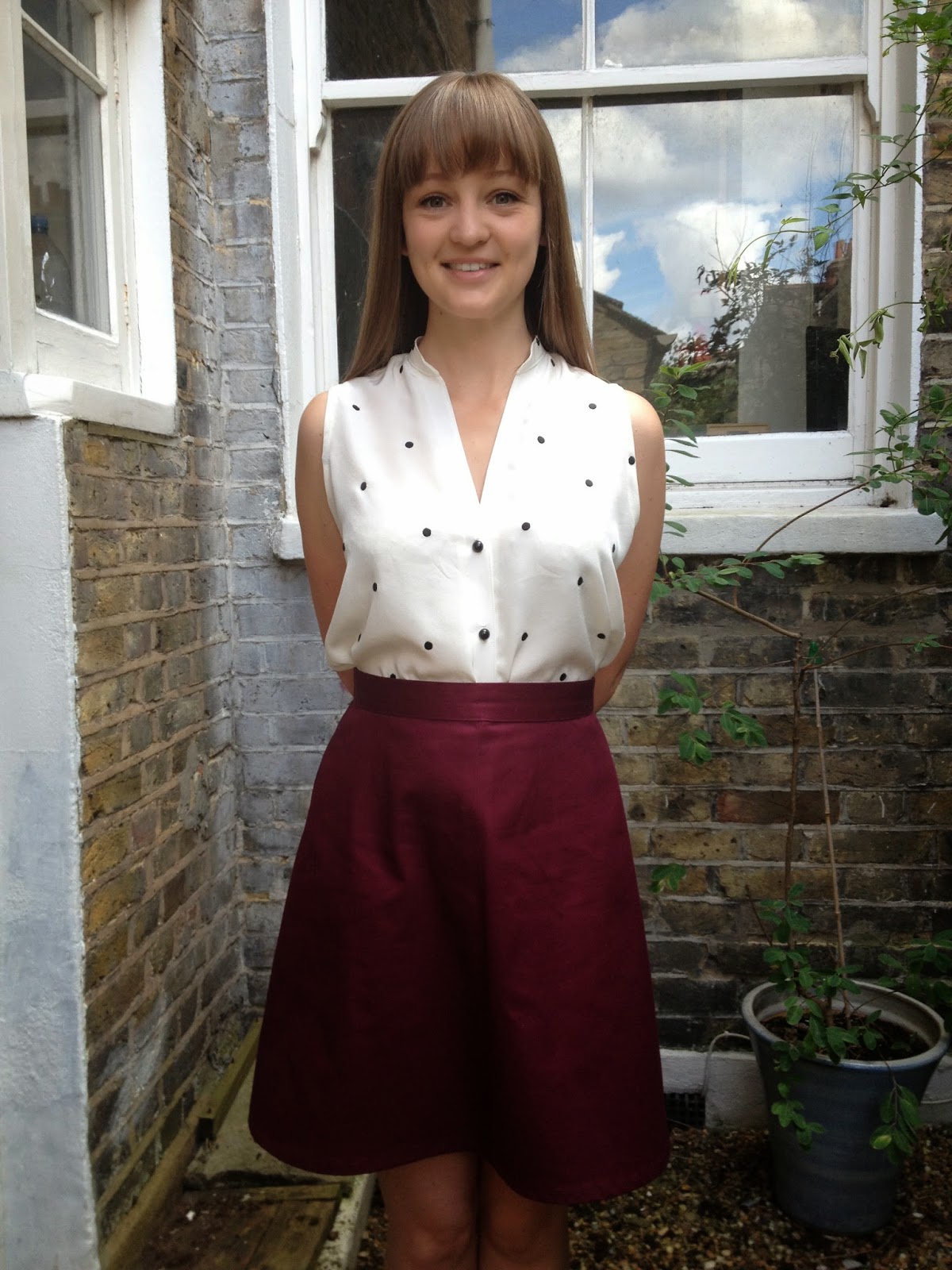 So as well as stealing fabric choice from Lauren I pretty much just went ahead and copied the whole design concept as her red tie-less wrap skirt is basically one of my favourite things ever and I needed to make it my own! The pattern is Tilly and the Button’s Miette and features a waist tie which I love but I thought I’d probably get more wear out of it without as I generally don’t like a lot of bulk around my waist. Lauren’s version replaced the waist ties with buttons at the back which is an equally cute design feature in my opinion! It was really simple to make this change. I just assembled the waistband as usual but omitted the waist ties. Then I trimmed down the band slightly to match the waist of the skirt when it was sewn up and turned through. Two buttonholes later and you’re done! I think this works really well in this fabric as it has some body and stiffness too it which, while perfect to hold the shape of the skirt might make for quite a bulky tie. 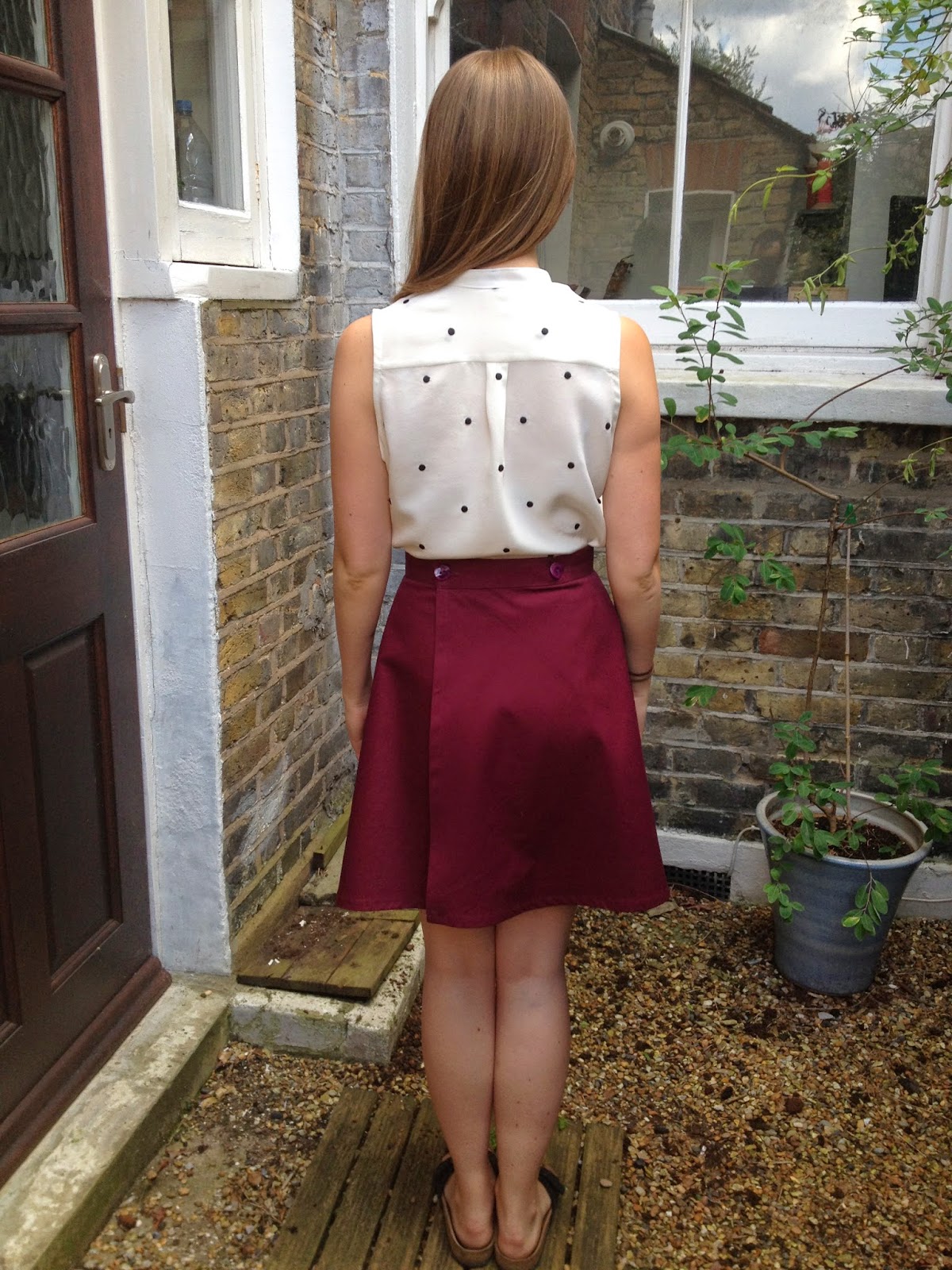 I had 1.5 yards of the twill and used pretty much all of it cutting this skirt without the waist ties so if you are doing ties you will need more. The buttons, which are placed at each end of the wrap, came from my stash. I couldn’t believe I had the perfect number in the right colour! I fell between waist sizes in the pattern so cut between the size 2 and 3 here and the straight 3 at the hips. It comes up true to size I think as it sits comfortably, although there is of course some leeway due to the wrap style. I cut 4.5″ off the length; I am pretty short but felt it wasn’t the most flattering on me at the intended length so kept on trimming a little at a time until I was happy. Even at this shorter length the overlap of the wrap is just perfect to prevent any unwanted flashing! I’m really happy with how flat the opening sits when worn. 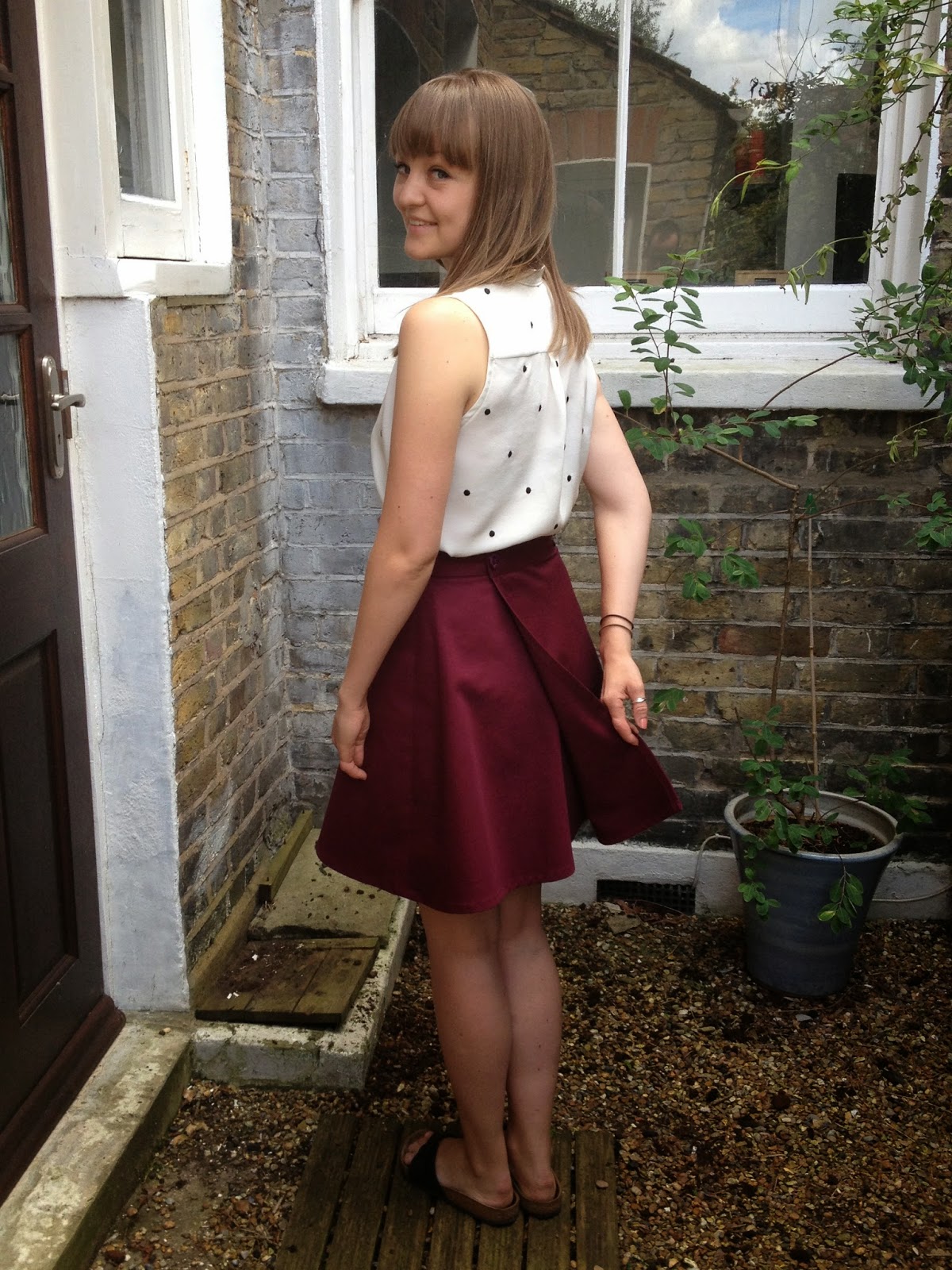 This was such an enjoyable make, with only a few pattern pieces in felt like it came together in no time. It took less than two hours to sew up (not including cutting time) but about half an hour of that was spent deliberating over the length. I thought the instructions were (as marketed) fantastic for beginners. I love the step by step photos as you can really sure that you have sewn it up right by comparing your results. I’ve noticed this feature in a few indie patterns recently, it was a huge help for me with the Bombshell Swimsuit. For a more experienced seamstress I’d still recommend it as it’s a great project for when you need something quick and satisfying as a break from a more challenging/lengthy sew.

I’ve had a lot of wear out of both items already, both are perfect fabrics for the summer heat we’ve had here in London recently. The skirt has even been worn for a game of tennis…although I’m not much of an athlete so the biggest test it was really put through was a bit of wind and bending over to pick the ball up repeatedly! 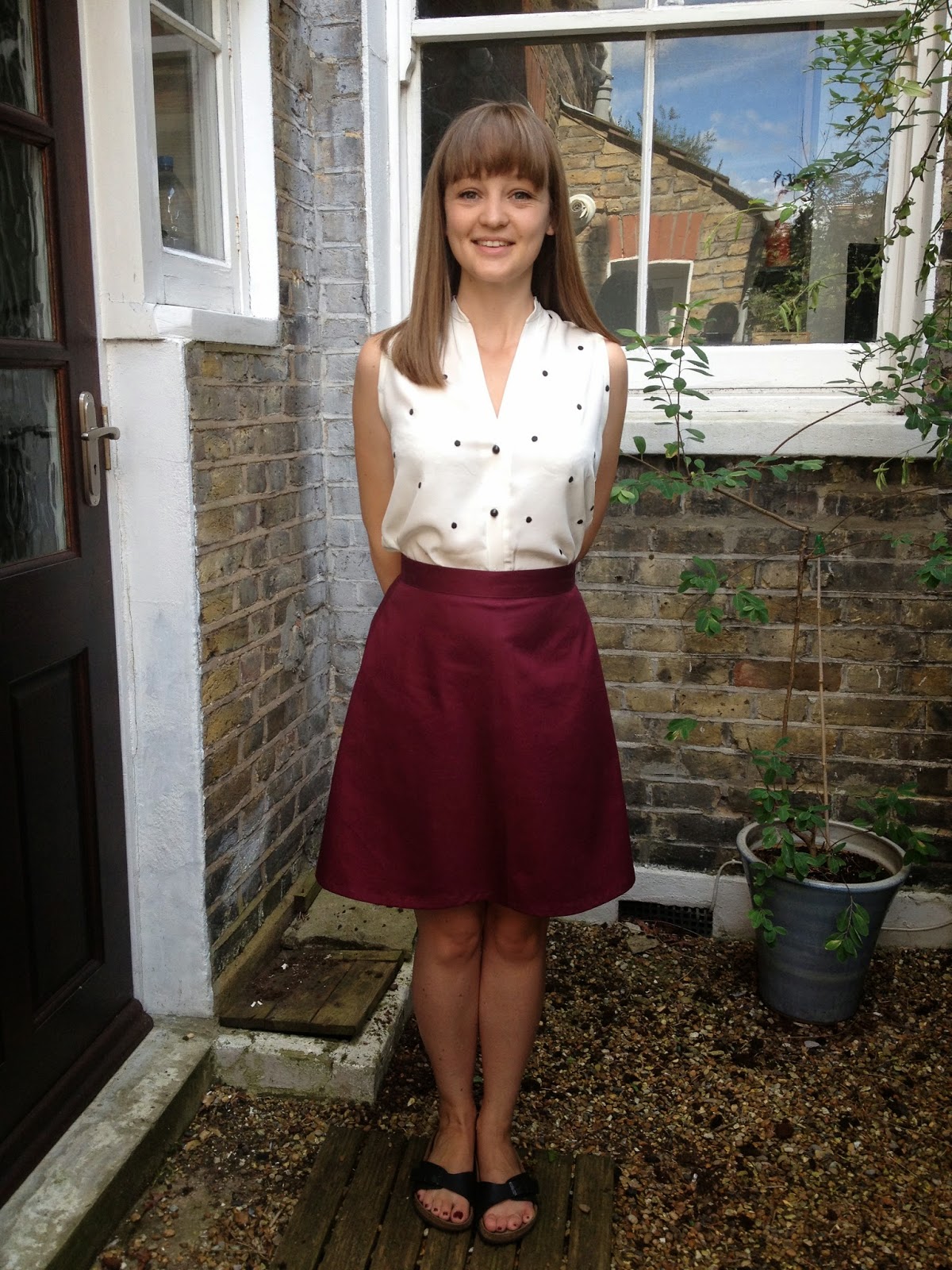 The Last Shirts and Shorts of Summer