written by Diary of a Chainstitcher October 28, 2015 18 comments 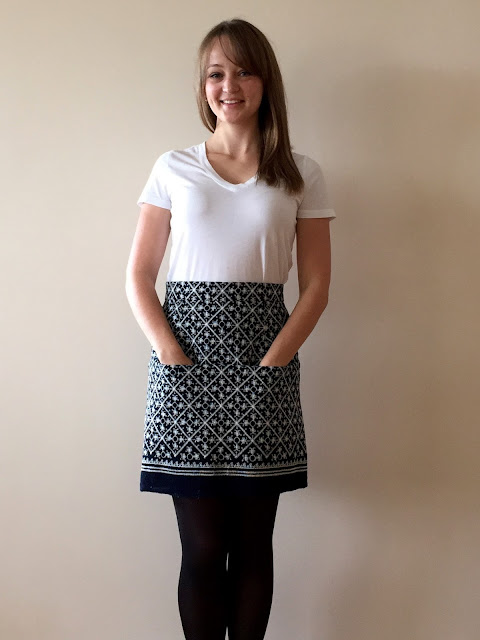 So this fabric is AWESOME. It was definitely the piece I was most excited about packing in my suitcase as I left the US last month. It’s a Rag & Bone embroidered raw silk and is one of the most unusual yardages I have ever laid my hands on despite being only $18 a yard. It’s a kind of home dec weight but so tactile because of it’s uneven slub and dense embroidery. The white stitching against the vivid indigo blue is beautiful and I think it’s the contrast between the uniformity of the embroidered design against the raw, natural feel of the base fabric that drew me to it. Unfortunately it’s not/no longer available online but I often find myself drawn to the Rag & Bone yardages so make sure to check them out here. When I spotted this one on the shelves in Mood Fabrics LA I had one of those ‘I have no idea what to do with you but I simply must have you’ moments. I knew I needed to make something with clean simple lines to showcase the beautiful embroidered design and that amazing border but what…Another customer in the store recommended a cushion (it would make an amazing cushion) but I wanted to wear this. A bag? A dress? A coat? Whatever it was it had to be the perfect project, I had to do it’s uniqueness justice. 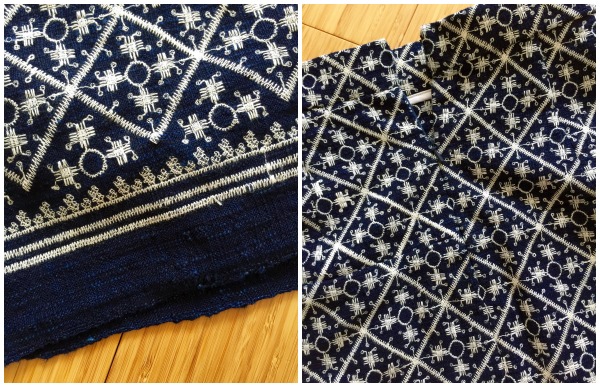 In the end I settled on a skirt with a straight hem so I could make use of that stunning border. Vogue’s 1247 pattern (designed by Rachel Comey) has been on my pattern wish-list for a while. I’ve seen so many gorgeous versions of it (including Sallie’s leather one on the Mood Sewing Network last year) but Vogue designer patterns in particular are fairly pricey over here in the UK so that’s always put me off. Then, just a week after I returned from America, I came across a brand new copy of the pattern in my favourite charity shop in Windsor for just £1! I think it was meant to be. 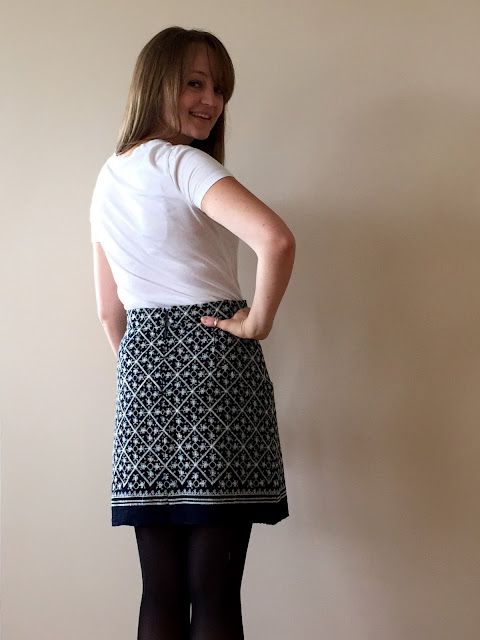 I wanted to make sure I got this right and didn’t waste my precious yardage so made up a quick muslin in the size 12 as that was the size my measurements indicated. I usually go down a couple of sizes in big 4 patterns but I had heard a rumour that the designer patterns can run a little truer to size and I think this is right here. The 12 was a little roomy so I probably would have cut the 10 but unfortunately I only had the larger size range of the pattern so instead I chose to just use a larger seam allowance on the side seams and reduce the length of the waistband piece by the same amount. I took an extra 3/8″ on the double off each side seam, meaning the seam allowances were now 1″. 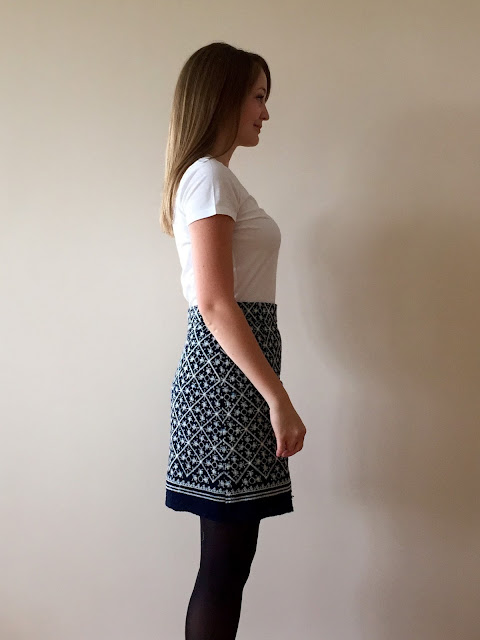 Of course in choosing this pattern I had given myself a bit of a challenge; for such a simple looking skirt when worn there’s actually quite a few seams involved! My favourite feature of the skirt are those big pockets in the front of the skirt which sit invisibly in the yoke seam. Keeping them invisible within the repeat of the embroidered design across my fabric was a daunting task to say the least. I have never put so much time and effort into cutting and pattern matching but it totally paid off. This skirt is right up there in the list of garments I’m most proud of. I don’t know about you but as much as I’m all for experimenting with cheap yardage, working with the good stuff makes me push myself so much harder and also means I will get that un-picker out and redo bits over and over until I know it’s the best I can do. 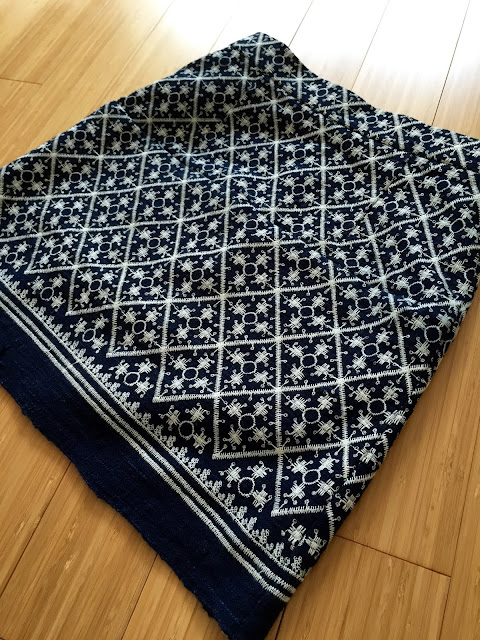 I began my fairly epic pattern matching challenging with the front skirt piece so I could align the front symmetrically and make use of the border for the hem. I then cut the back skirt pieces so I could make sure the border continued at the same level around the skirt. When working on the back I concentrated on how the centre back would look rather than the side seams as those curved edges were never going to line up perfectly. I’m really pleased with how symmetrical the pattern is down the side seams though and how the criss cross lines do intersect with one another. After cutting the skirt pieces I moved on to the front yoke then back yoke, before cutting the waistband and pocket pieces last. The yoke pieces were my biggest challenge as I really wanted the embroidered design to continue seamlessly across the front and back panels. I am so SO pleased with how it turned out. There were many little victory dances in front of the sewing machine with each seam I sewed! 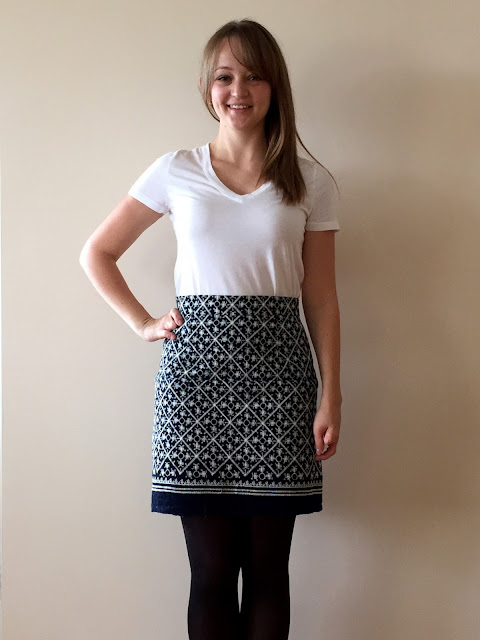 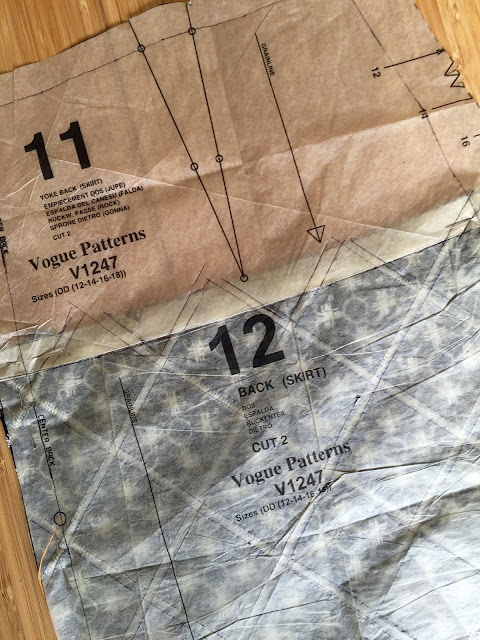 I had bought 2 yards of the fabric as it’s only ……….wide. I only needed just over a yard for the skirt, despite having to be a little wasteful because of the pattern matching. I’ve already got another project up my sleeve for what’s left over! One thing I would point out about this pattern is that it’s very short! I haven’t lengthened it here and love this length but the instructions tell you to hem it by 2″ and I haven’t hemmed it at all. Plus I’m only 5ft 3. I deliberated long and hard about whether to hem this or make use of raw and uneven selvedge edge which doesn’t fray. In fact I wore it out to a sewing meet up last weekend un-hemmed so I could ask the advice of other bloggers. The unanimous decision was to leave it as it was! I think the depth of plain border before the embroidery starts really works proportionally with the skirt and I wouldn’t want to make it any narrower. The only other change I made to the pattern was to remove the overlap at the waistband join, I just prefer the flat finish when it’s edge to edge. 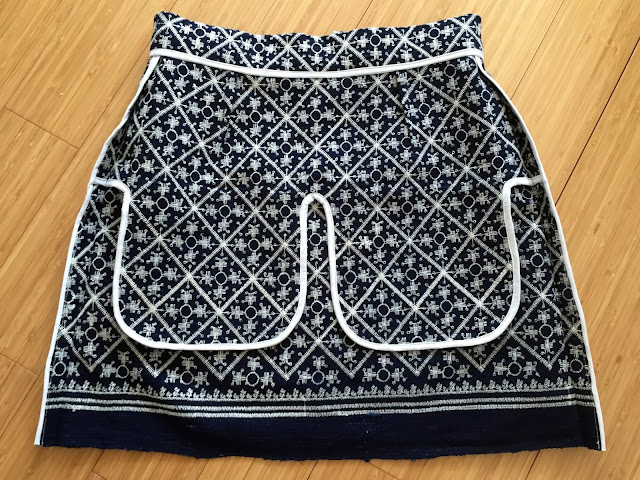 I used a mid-weight fusible interfacing for the waist band and a bit of white cotton shirting I had left over in my stash to make the binding. I was nervous of this step in the construction as I thought it was pretty skinny for finishing the bulky and uneven seam allowances of my chosen fabric, especially around those tight little corners of the pocket linings. But it turned out pretty great and I love how the plain white looks against the rich blue and bold embroidery! I applied it in two steps and made sure to trim down the raw edges of the main fabric between stages. This pattern needs a lot of binding; it wasn’t all that painful applying it but man did it take a long time to make. Binding is the perfect finish for this fabric though as the slubby weave means it likes to fray in big chunks plus it keeps the cut edges of the embroidery nice and secure. I had very little trouble with the embroidery; despite being concerned about the density of some areas and how thick it would get where seam allowances intersected my machine had no trouble at all. I chose a side 90 needle, one up from what I would usually use as I thought an extra bit of strength to get through all those threads wouldn’t go amiss. 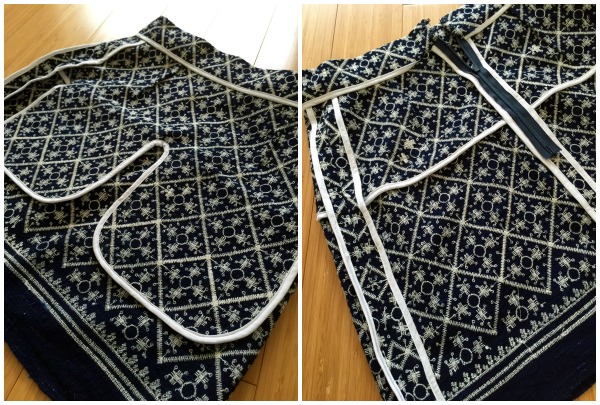 This skirt pattern has won another huge fan. I’m thinking my wardrobe could definitely benefit from a denim one, a black one, a corduroy or maybe a fun floral…I’ve been making quite a lot of repeat or similar patterns recently which has been lovely and satisfying but it was really great to get my teeth stuck into something a little bit more involved and that really pushed my pattern matching skills to the limit. Sometimes slow sewing is the best.

A Tweed Skirt for Autumn