Good morning and happy Friday, everyone! I am back again with – you guessed it! – another button-up shirt. Ha! Is this all I wear these days? Probably. At least it’s a different pattern than last month 😉 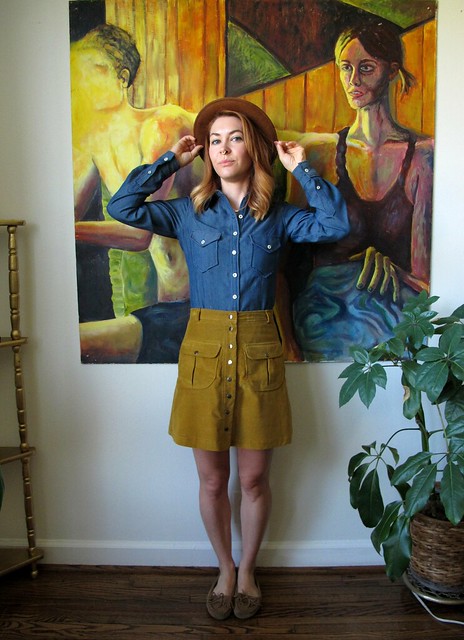 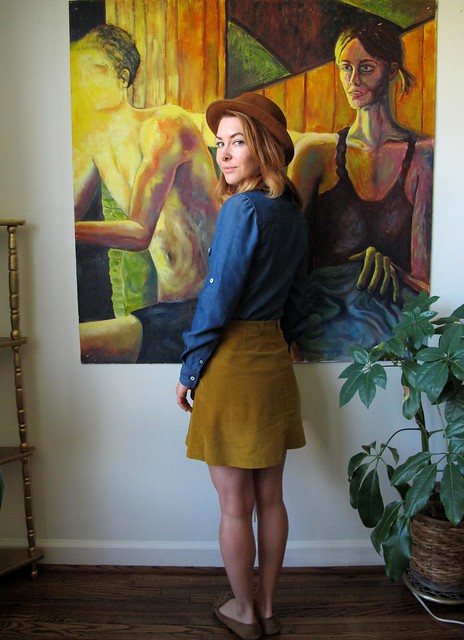 When I was in NYC earlier this year, I made some time during my trip for a couple hours at Mood Fabrics flagship store in the Garment District. Since I live way way outside of NYC, I don’t generally get this opportunity except once or twice a year – so I try to make it count! I always come prepared with a list and a plan – and while I allow myself to veer off the list if I see something shiny that appeals to my magpie tendencies (very much like when I go grocery shopping, although that sort of veering usually involves chocolate :P), the list is helpful for keeping me on track so my purchases are a little more focused. I don’t know if you’ve had the pleasure of shopping in the physical Mood Fabrics store, but it is QUITE overwhelming if you’re not used to it! The aisles of fabric go on forever, piled to the ceiling – and there are 3 glorious floors of it!

One of the things on my list for this trip was to find a chambray/denim Tencel shirting. I’ve seen this all over sewing blogs and even in RTW – chambray Tencel was apparently very hot last fall (whether or not it’s still hot this fall – whatever, I like it, that’s all that matters!). I wasn’t familiar with Tencel until a couple of years ago, when I was sewing for local clothing designer Elizabeth Suzann and she started using it for some of her designs. Tencel is very similar to rayon – it’s a wood cellulose fiber, so it breathes beautifully, and it has an incredible drape. Unlike most of the rayons I have sewn with, this is a bit thicker and easier to handle – it’s not quite so floaty. My brief internet research also tells me that Tencel is a very environmentally friendly, and the fibers are grown sustainably. Gooooo Tencel!

I found this particular Tencel in the depths of the shirting fabrics in Mood’s store, and it was exactly what I had been dreaming of when I wrote my list. It’s drapey and nearly as soft as a baby’s butt – just like rayon – but with a thicker hand and an incredible sheen. I am pretty sure this is the same stuff available on the website, actually (also FYI, Mood Fabrics now has tons of Tencel on their site – including flannel WUT). I bought enough yardage to make a long sleeved button up, prewashed that bad boy when I got home, and set it aside to allow summer to pass before I cut into it. And finally, here we are! 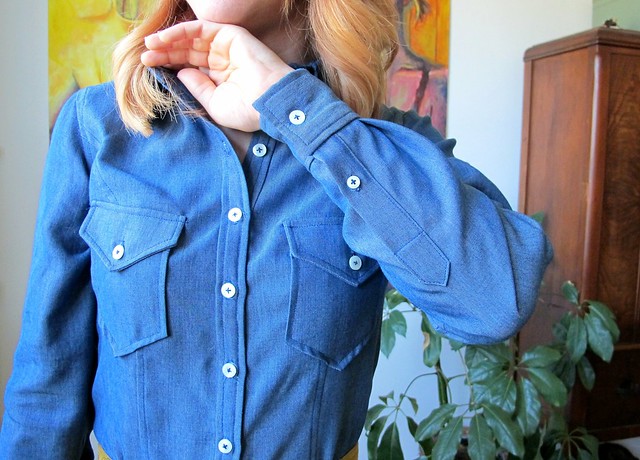 I used my very favorite shirt pattern, Butterick 5526, to sew this up. I’ve made this pattern dozens of time at this point, so there’s not much I can say about it that I haven’t already said dozens of times. I’m so familiar with this pattern, I’m pretty sure it could sew itself if I gave it a chance. I decided to mix a couple things up to make my shirt look a little more like a workshirt – rugged, casual details, but with that pretty, slim fit that only princess seams can give you.

I redrafted the back to include a yoke (and by redrafted – I mean I just sliced off the top of the pattern piece and added seam allowances, ha!) and swapped out the simple bias plackets for a more manly tower placket. I also drafted pointed pockets with matching pointed flaps. Another big change was to topstitch everything at 1/4″, instead of my usual 1/8″ edgestitching. It’s a lot more bold and pronounced, like the RTW stuff I’ve been lurking on, and gives a completely different look! All the interior seams are flat-felled, with the exception of the yoke – which is faced with more Tencel. Oh, and I added button tabs to the sleeves, so I could roll them up if I wanted to!

Working with Tencel wasn’t much different than any other shirting fabric I’ve used, although it does have a tendency to stretch and slide if it things it can get away with it. I added lightweight fusible interfacing to all the normal shirting bits – collar, collar stand, button placket, etc – as well as the sleeve tabs and pocket flaps, just to give them a little more structure. This fabric responds really well to heat, so I was able to steam everything easily into submission, which is a must for shirt making. 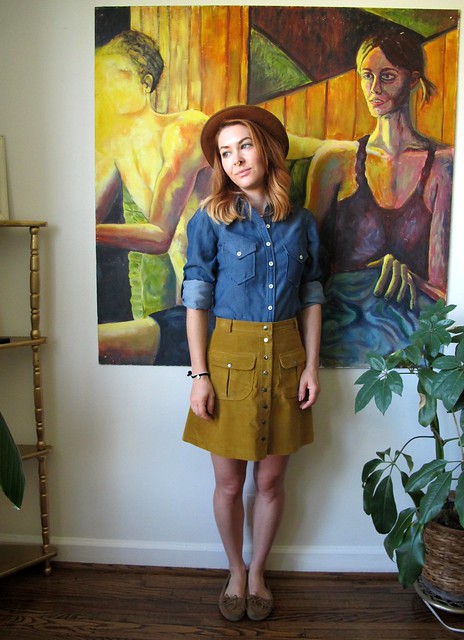 As a bonus, the skirt I am wearing in these photos was also made with fabric from Mood Fabrics! I used a cotton corduroy and you can read all about it in this post from earlier this year. This skirt has been on hold during the summer – it’s too hot here to wear cord, plus, it just looks silly in 100* weather – and I am excited to bring it back into wardrobe rotation with these dipping temperatures! Mustard and denim – is there a prettier color combination? I think not!

A Little Black Dress with A Little...