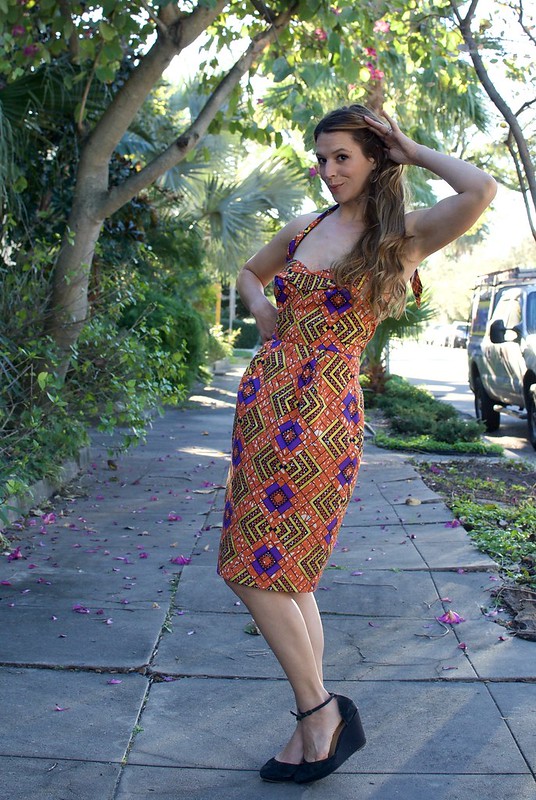 Hello there, Mood Sewing Network!! I hope everyone has made it through January relatively unscathed.  After the holidays it can feel like a long slog until there is anything to look forward to again – mostly long days and pleasant weather! ‘Round here I can’t complain too much about the weather – it’s been unseasonably warm.  And that “post-holiday-funk” is always broken up by Mardi Gras! Now, Galveston’s Mardi Gras festivities are nowhere near the to-do that it is in New Orleans, but it’s nothing to sneeze at either! There’s parades and parties and beads galore! 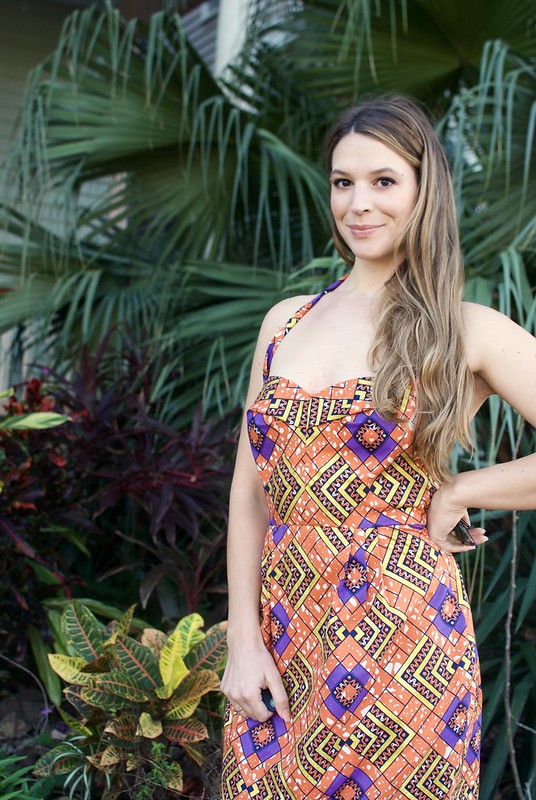 I’ll be honest, I don’t usually do much for Mardi Gras (unless dodging tourists and making sure I don’t ride my bike down a parade route counts…) But this year I have a work event that is coinciding with the Mardi Gras festivities so I’ll be forced out of my hibernation! Lucky for me, Mood Fabrics offered us a challenge this month to make something with African Wax Print so I could make myself a proper party dress for the occasion. I don’t know about you guys, but I’m pretty sure I’ve never seen a fabric quite so fit for a celebration as this! 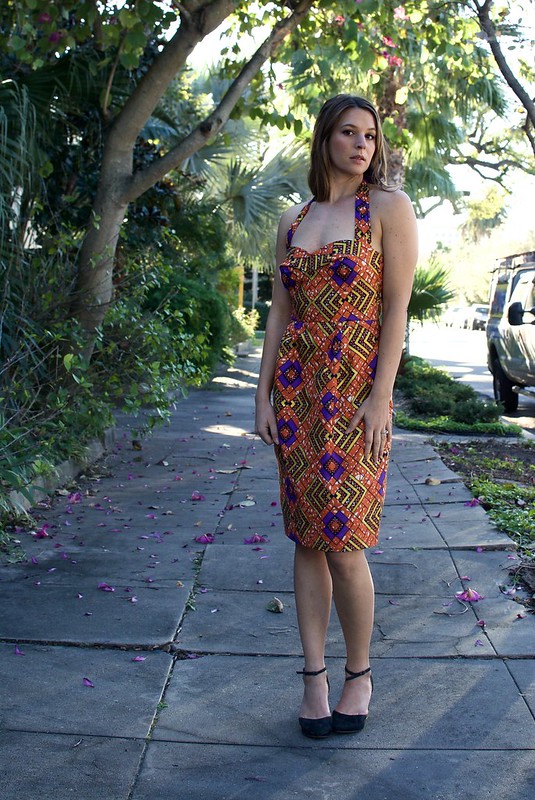 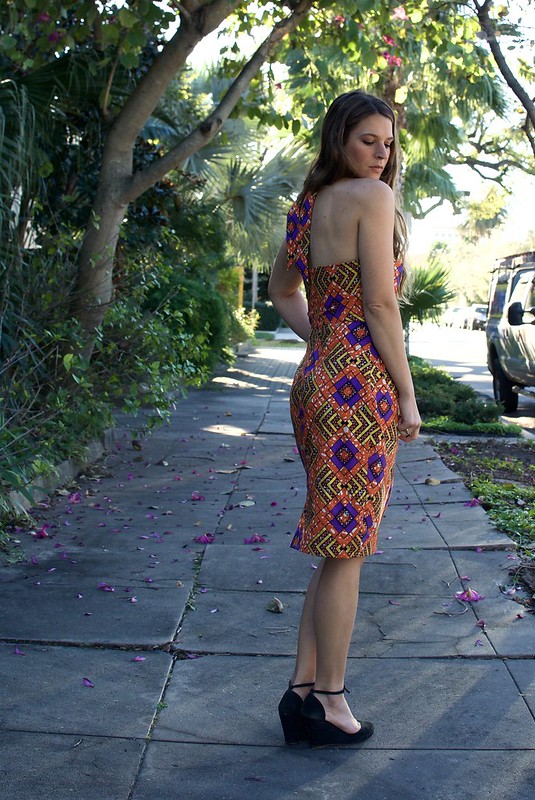 African Wax Prints (also called Ankara) have a fascinating history.  When the Dutch were colonizing Indonesia in the 1800’s they brought along with them many West African workers (some slaves, some free).  The Dutch and the West Africans were very impressed by the Indonesian batik cloths, and the Dutch returned to the Netherlands with the intention of mechanizing the process and flooding the market with a cheap imitation batik.  However, their mass-produced wax resist fabrics had imperfections that didn’t appeal to the Indonesians, so they never found their intended market.  The West Africans, however, liked the way the new method contained imperfections, as this was part of the appeal of the wax resist process to them.  So the Dutch began selling their wax prints to the West African workers, who brought them home to their wives.  Over time, the fabric became a status symbol, and a method of communication among the West African women, and the Dutch tailored their designs to their market’s tastes and preferences – patterns became more geometric and abstract.

And so, African Wax Prints came to their present-day iteration through a visual game of cultural telephone! Most African Wax Prints are still produced by the Dutch, including the selection that Mood has to offer.  I chose to work with this Mandarin Orange and Purple Waxed Cotton African Print with Gold Metallic Glitter. 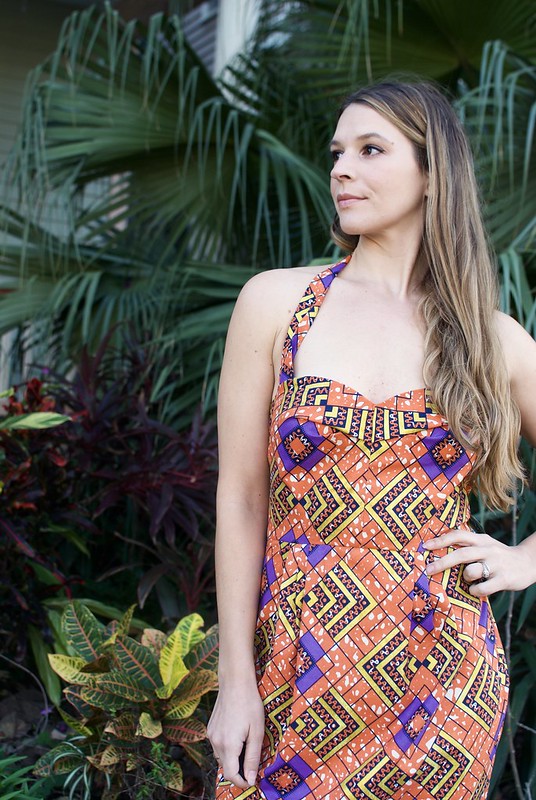 I really enjoyed working with this fabric! It’s very tightly woven and opaque, which makes it useful for a number of applications.  I prewashed my yardage on cold and then hung to dry.  It seems to resist wrinkling really well, and it presses beautifully! I was a little worried about using heat on the gold glitter on my fabric, but I needn’t have worried! Somehow it didn’t budge at all, despite the high temps and steam of my industrial sewing iron! I don’t understand how it didn’t budge, but it didn’t! But of course it’s the brilliant colors and bold pattern of this fabric that really steal the show. 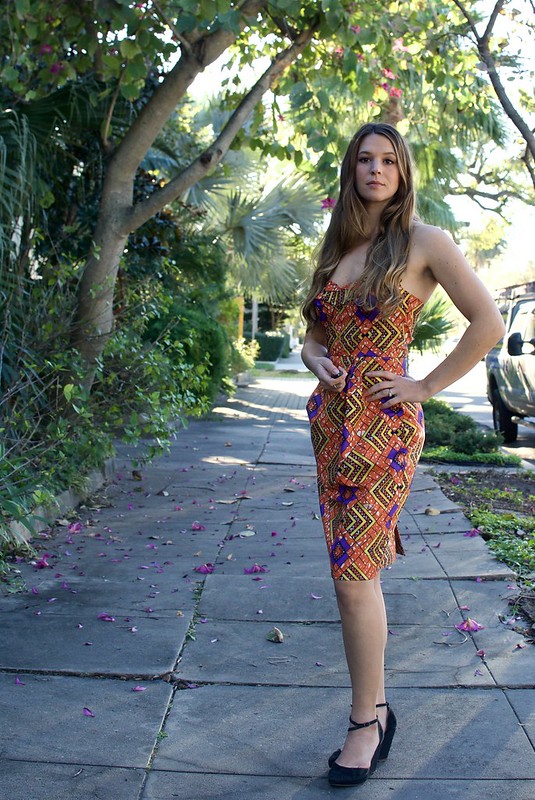 The pattern I decided to use is from a new-to-me indie company called How To Do Fashion which has an adorable array of vintage inspired patterns.  This is the No. 6 København dress – a late 50’s inspired halter neck dress.  This was such a quick and fun sew, and it produced such a fun garment! Dresses like this are what made me fall in love with sewing to begin with – you could make plans in the morning and by evening have an entirely unique and handmade frock to wear out on the town! The simple, but lovely (and quite ingenious) pleating at the center bust gives this dress just enough interest without making it a complicated sew.

The dress is partially lined – just the upper half.  I suppose this is so the proper vintage lady can pair it with a half-slip, but I probably won’t bother, as this fabric is very comfy and opaque, and I only wear stockings in dire circumstances! All raw edges were finished on my overlocker. 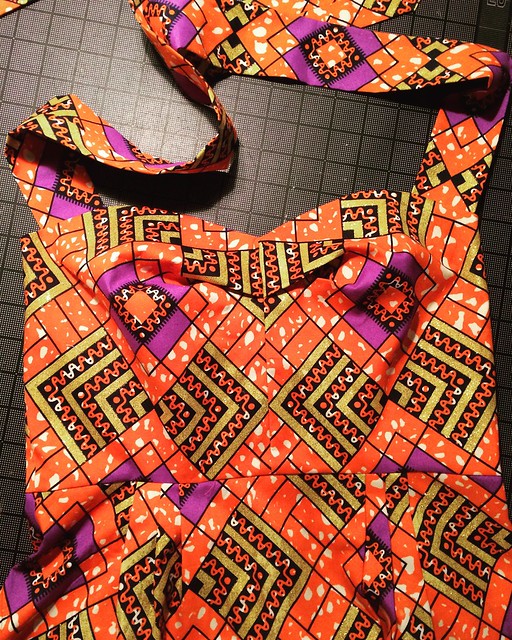 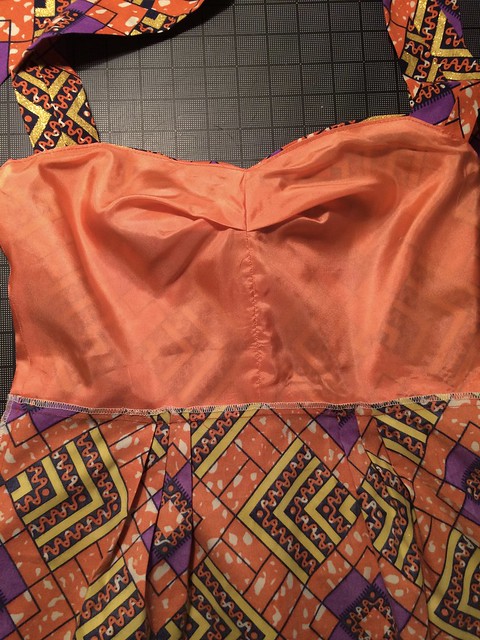 A nice little touch with this pattern is that it included a hem facing.  I always love a good hem facing! Not just because it saves you from having to ease in excess fabric, but it also gives a really nice structure and weight to the hem.  I’ve always felt that a robust and sharp hem was a hallmark of a well-made garment.  And I’m also pretty sure that no one but a true sewing nerd would ever notice such a thing! 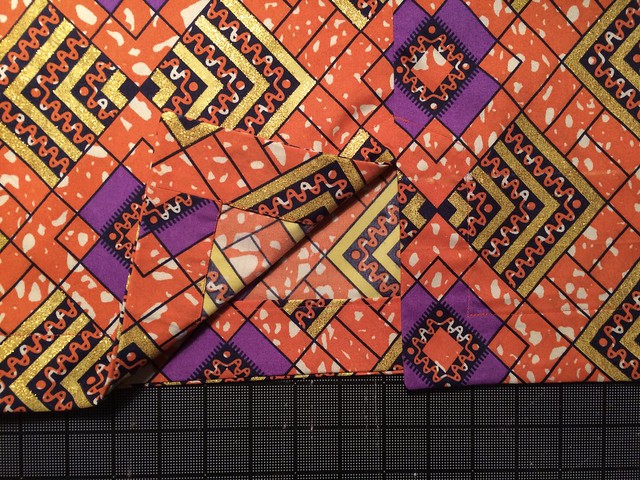 And there’s a close up of that robust hem, for anyone else out there who might enjoy such things! 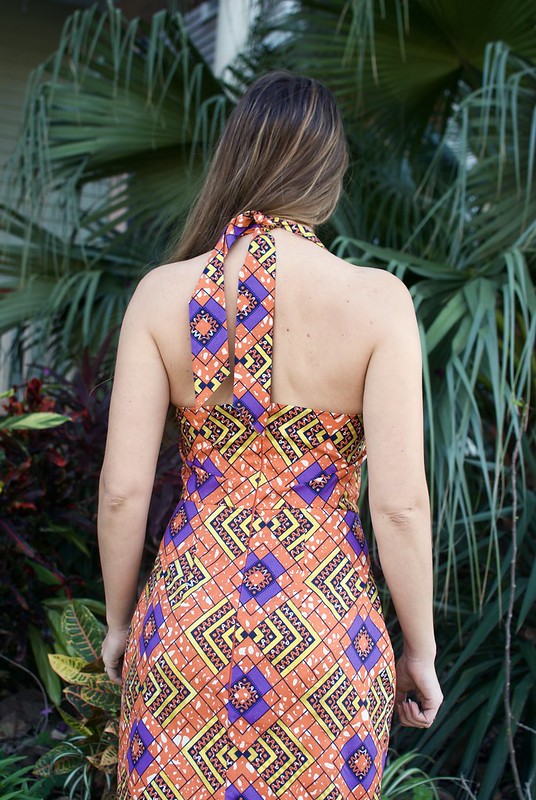 The dress closes with an invisible zipper – quick and effective! And check out that pattern matching (*rolls eyes*). That was sarcasm there, folks.  Believe it or not, I did try to pattern match at the center back.  While it’s not perfect, I am glad that I kept the general horizontal and vertical flow of the pattern.  If that was off I don’t think I’d be able to withstand the eye-twitching! 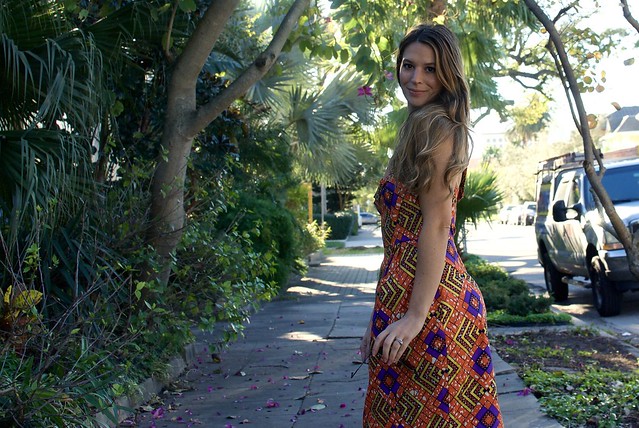 Well, that’s all for this post! I love my new party dress and can’t wait to take it out for a spin! Do you celebrate Mardi Gras (or Carnival) where you are? What are you wearing? Or what would you wear if you were going to Mardi Gras this year?