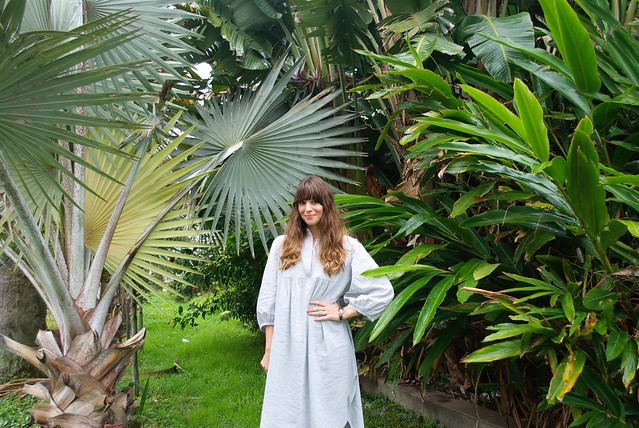 Hi everyone! So there is definitely a story behind this dress.  I had originally planned on making a spring jacket for the Mood Sewing Network this month.  Our winters here in coastal Texas are sort of all over the place, but more often than not we get that in-between weather – too warm for a full on wool coat, but too cool for just a cardigan, and often rainy.  Basically, the ideal weather for a light, casual, hooded jacket, which just happens to be a major hole in my wardrobe. I’ve been slowly working away, muslin-ing just such a jacket, however over the past few weeks we’ve had gorgeously mild, sunny weather, and the thought of making such a utilitarian type garment started to feel just about as appealing as doing my taxes – which is to say not at all. 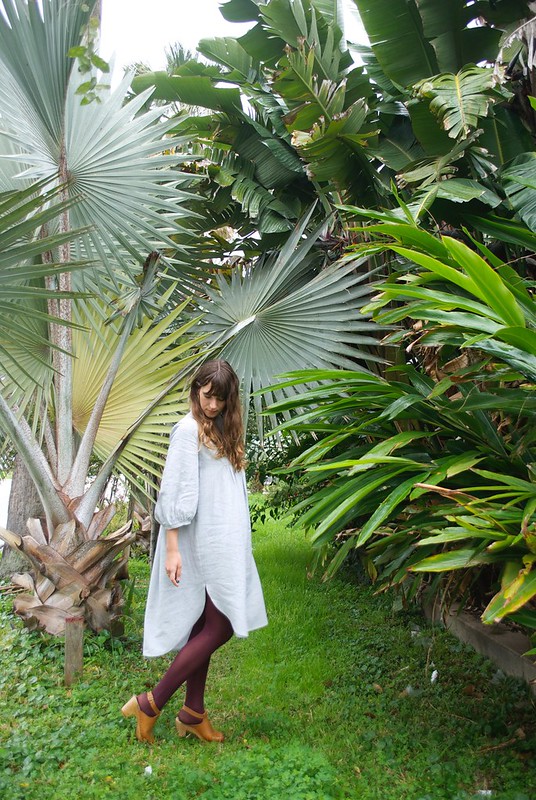 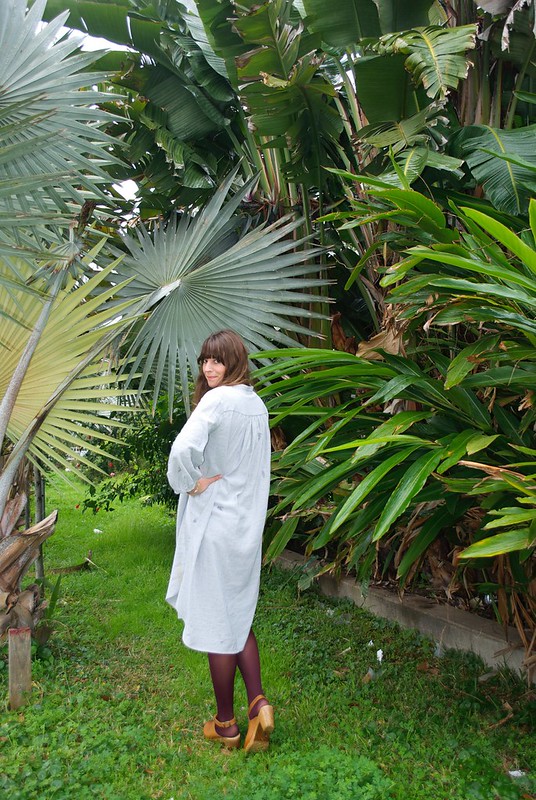 So I set my jacket aside and got to work making my ideal spring dress – somewhat whimsical, and folksy, the kind of thing I’d love to meander through fields of wildflowers in. Only as soon as I put the finishing touches on my spring dress the clouds rolled in, the wind picked up, and the temperature plummeted! So much for a spring dress! So if I look a little grumpy in these photos, that would be why!

But enough talk of the weather and dashed hopes for an early spring! Let’s talk about the dress.  I ordered a few yards of this White/Gray Striped Linen-Blended Woven from Mood Fabrics online back in January when I had already decided that I was totally over wool, and flannel, and every other winter weight fabric out there (I’m not a cold weather gal, can you tell?) It’s such a simple fabric, but it seemed evocative of the type of easy, breezy dressing I always aspire towards as the weather warms up. 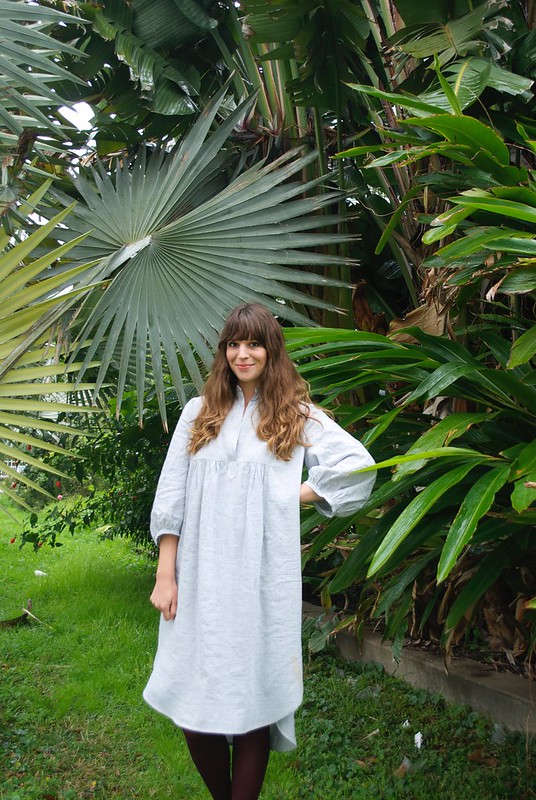 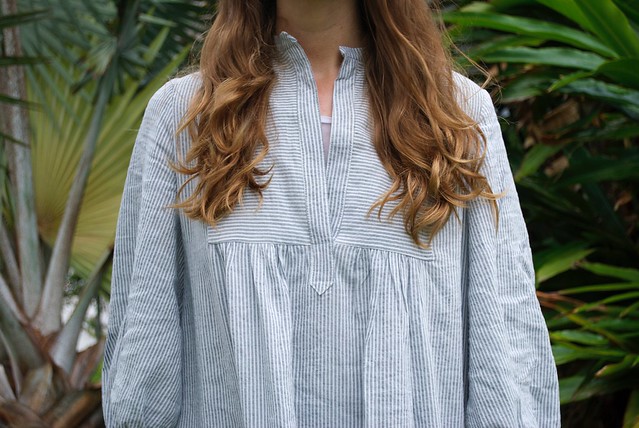 This fabric is a linen, rayon, and cotton blend – which basically translates to ‘a dream to work with’. It was incredibly easy to cut and handle and press, and it made the prettiest gathers, which was perfect for the pattern I chose. I also had a lot of fun planning out the direction of the stripes throughout the garment. Because it’s a linen blend it doesn’t wrinkle up terribly like 100% linen does, but it still does retain that lovely sort of ‘rumpled’ look.  This particular fabric even had a bit of a seersucker-y texture to it, but with a much softer, even ‘bouncier’ hand than traditional seersucker. And it is completely opaque, which means once that warm weather rolls back in this dress is going to be a great throw-on-and-go look! 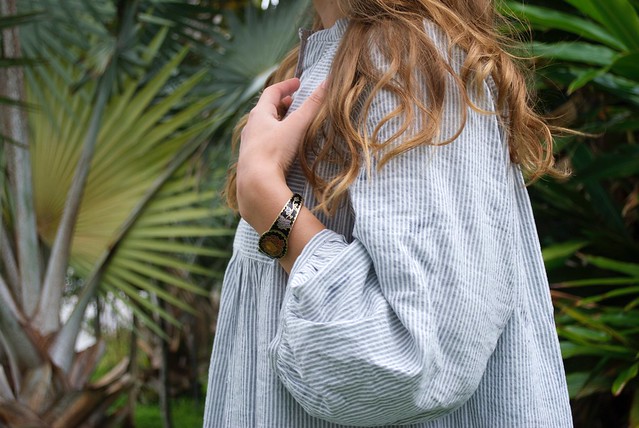 In the pictures online, and in person, this fabric was giving me some serious ‘Period Costume’ vibes – like a man’s nightshirt from the 19th century, or a simple Laura Ingles Wilder approved prairie dress, with a little 70’s folk singer thrown in for good measure.  So I decided to go with that as my inspiration when I paired this fabric with Burda 10/2010 #122 a placket front shirt dress.  I’ve made this pattern once before and with my first version, and this version, I changed the sleeve shape to be cropped with a full, gathered cuff. This definitely adds to the ‘folksy’ vibe of the whole look. I definitely think the key to making a full, poofy, poet sleeve, like this, work (and not veer into ridiculous Pirate territory) is to keep the cuff wide so the sleeve can fall back around your arm as you move (and show off your best bohemian costume jewelry of course!) 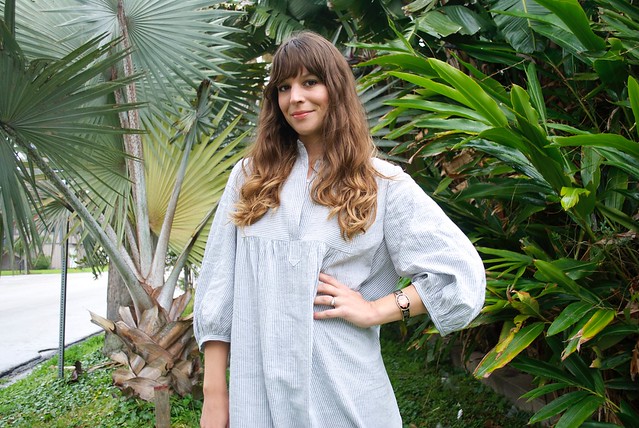 I made a few other small tweaks to the pattern this time around, but I’ll go into that more in detail on my blog later this week.

All in all I’m really happy with this dress. The fabric is perfectly simple, but I think it really is the starting point for the story that this dress tells. The look as a whole may not be for everyone (it is a lot of volume!) but if you grew up with as much Little House on the Prairie, and Joni Mitchell, and a general love of Period Films and as I did, perhaps you can understand the appeal?

Anyone else out there a fan of homestead-y fashion? Anyone else itching to rush the seasons? Do tell!

A Lace Dress for a Non-Lace Girl