Happy New Year’s Eve Eve, everyone! I’m amazed at how swiftly this year has floated by – it seems like only a short time ago that I was writing my first MSN post of 2016, and here we are on the verge of 2017. This past year has been a rough one for a lot of people, and it’ll be good to put it to a close. But first – one more dress for the books! 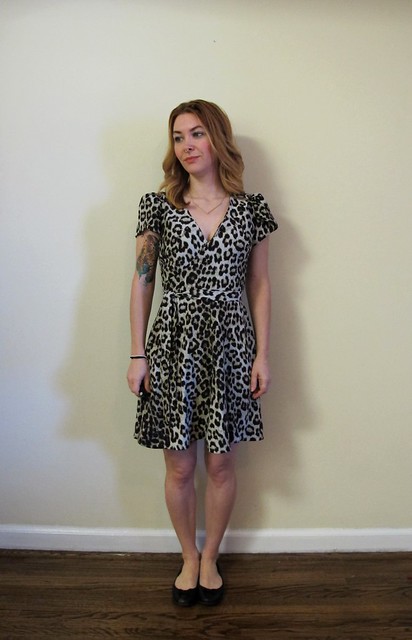 Leopard is one of those prints that people either looove or truly hate – personally, I can’t get enough of it! I found this leopard silk charmeuse ages ago at Mood Fabrics website and snapped up 2 yards without a real plan other than that it would eventually become something awesome. It hung around the site for a long time, but appears to finally be sold out – although Mood has tons of other great silk prints that are worth looking into! I used a little corner of it to make a foam cup bra, but the majority of the yardage sat in my stash while I tried to decide what to do with it. This month, I decided it was time to use that precious silk once and for all!

My pattern choice was Simplicity 6266, which is a pattern from the 70s featuring a surplice neckline, a flared skirt, and tulip sleeves. I actually really wanted to make this dress with the long sleeve variation, but unfortunately I was a bit short on fabric due to the aforementioned bra (which I wanted to curse, but honestly, I love that bra so #noragrets). I’ve made 6266 twice before – the first version is actually cheetah print with the tulip sleeves, ha! What can I say, I love those animal prints 😉 I do wear that version a lot, but the fabric is a polyester blend which isn’t terribly comfortable in the summer. I figured I could accomplish two things at once with this project – use that precious silk *and* improve on a favorite go-to – so here we are! 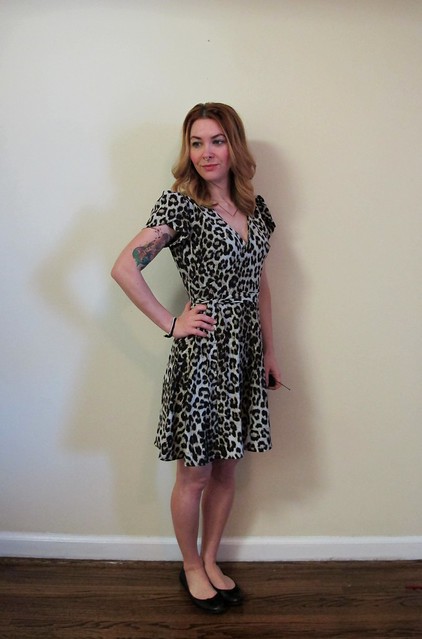 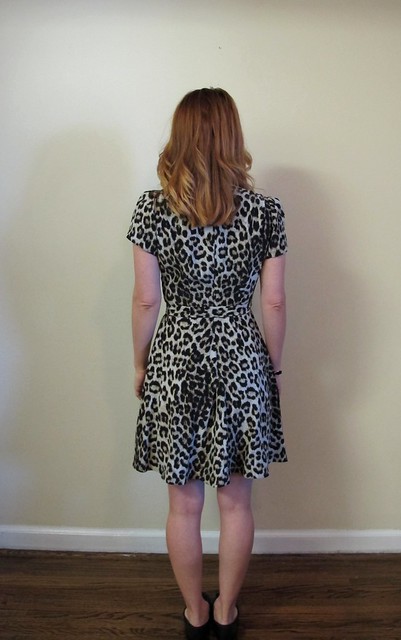 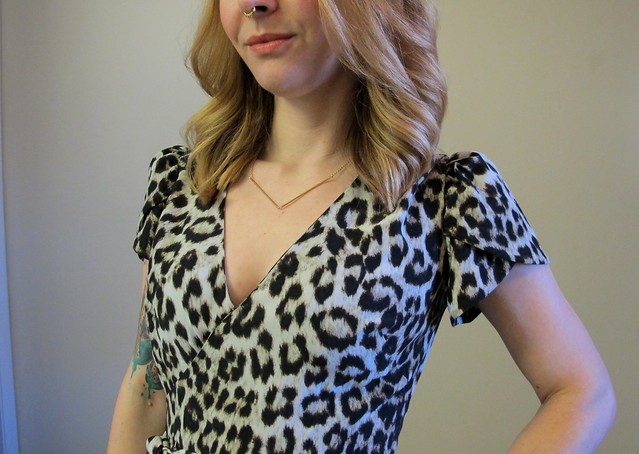 I have a lot of experience with sewing silk – its one of my favorite fibers to wear – but charmeuse can be a bit more difficult than the crepes that I tend to work with. For this project, I tried a new-to-me technique to stabilize the silk so that it would be easier to work with, which involved gelatine. Basically, you mix a packet of gelatine (preferably non-flavored, but don’t let me judge your artistic endeavors) with water and boil it until it thickens, then you soak your fabric in the concoction for an hour. Lay it out to dry, and it should stiffen into something that’s a bit easier to work with (for full instructions, see this Threads article). This method worked really well – it gives the fabric a little more body and makes it handle much more like a silk organza. It is a LOT easier to work with – especially cutting, since it doesn’t want to shift as much. To remove the gelatine, you just need to wash your garment (obviously this will only work on something that isn’t dry-clean only – so for my silk, I machine washed it first, before doing the gelatine bath) and it should remove all the stiffness.

In terms of sewing, this project went very smoothly. The gelatine soak made the silk easy to work with. I used a fresh 70/10 Mictrotex needle and polyester thread, and all my seams are serged and pressed open (I know that traditionally, one uses French seams for silk – and I generally do – but I knew I’d have to make some fitting adjustments to this dress and I didn’t want to deal with unpicking French seams). I omitted all the topstitching except at the waist, which was needed to stabilize that area. The hems are hand-rolled and finished with a blind stitch, also done by hand. That part took foreeeever, but was worth it for the effect! I changed my lapped zipper for an invisible zipper, and interfaced the seamline along the zipper for some extra support. I also kept the ties separate, and sewed them together into one long tube that can be tied around the dress, instead of attached at the waistline. Sometimes I like to wear a belt with this design, so I wanted the ties to be removeable.

I did hit some snags with fitting, which I was anticipating. Like I said, I’ve made this dress a couple times before – but I don’t really fit in the pattern (the one size is for a slightly larger bust than me). I usually just make minor fitting adjustments as I go, and of course I never transfer those to the pattern tissue (duh, that would make way too much sense). Also, fabric can affect how a garment fits… so I knew I was in for some tweaking. I sewed the waist and shoulders at 3/4″ instead of 5/8″, and that helped, but the bust is still a bit loose. Tacking it down invisibly at the center front helped. I also ended up having to take in the shoulders – they were too wide, with the shoulder seam falling off my actual shoulder. Combined with the puffy tulip sleeves, it gave me a bit of a linebacker look haha. Since everything was already finished at this point, I just took in the shoulders by sewing a 1/2″ pleat right on top, which brought everything in and also created a soft pleat over the bust. This made the bust fit better too. A bit of a hack-y fit, but it worked out! 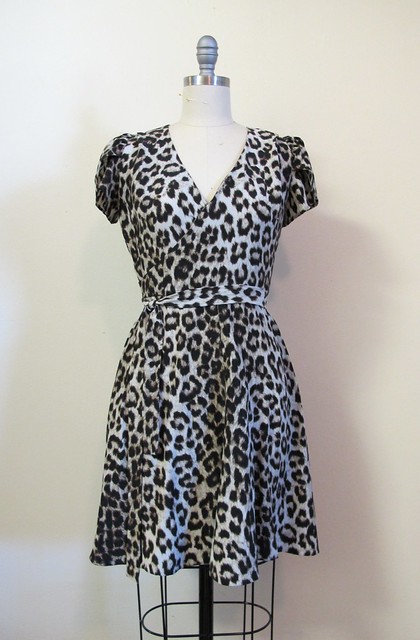 In retrospect, I think it’s a good thing I didn’t have enough fabric to do the long sleeves – it would have been too overwhelming with the leopard print. I wouldn’t exactly call this dress demure, but I consider leopard a neutral so it’s basically an LBD as far as I’m concerned 🙂